And the Winner Is (Coming down to 6 votes)...Jase

Jase from My Life Next Door by Huntley Fitzpatrick

Jase is definitely the most swoon-worthy character because he is smart, hard, working dedicated, straight forward, funny, attentive, loyal and he would do anything to help Sam. He puts his family ahead of himself.  He is a modern day Romeo when he climbs up Samantha's trellis to introduce himself. He is every dream girls book boyfriend!!

Jase is described as "rangier, leaner, his wavy hair a lighter brown, already with those streaks of  blonde that brunettes get in the summer." Has wavy brown hair, green eyes, and olive skin.

He is talented at football, likes to fix things especially cars, and vacuums. He is very good with taking care of his younger siblings ex. babysitting.

He is very good at training for his upcoming try-outs for football. Jase is also known for his animals which live in his room.


His first meeting with Samantha:

"Hey," he says again, sitting down next to me as though he knows me well. "Need rescuing?"
I stare at this boy. He's obviously a Garrett, and not Joel, but which one? Up close, in the light spilling from my bedroom, he looks different from most of the Garretts--rangier, leaner, his wavy hair a lighter brown, already with those streaks of blond some brunettes get in the summer.
"Why would I need rescuing? This is my house, my roof."
"I don't know. It just hit me, seein gyou there, that you might be Rapunzel. The princess in the tower thing. All that long blond hair and... well..."
"And you'd be?" I know I'm going to laugh if he says "the prince."
Instead he answers "Jase Garrett," reaching for my hand to shake it, as though we're at a college interview rather than randomly sitting together on my roof at night.

Jase has a rather unusual... hobby?

"Walking into Jase's room is like walking into... well, I'm not sure... A forest? A bird sanctuary? One of those tropical habitats they have at zoos? It's filled with plants, really tall ones and hanging ones and succulents and cacti. There are three parakeets in a cage and a huge hostile-looking cockatoo in another. vI look, there are other creatures..."

Jase studies my face, then takes my hand, pulling me down. He carefully curls around me, so my head is resting on his arm, and his head's resting on my shoulder. His fingers move slowly through my hair. The paradox of Jase is that at the same time I'm so conscious of the head of his chest against my back, and the muscles under the shorts on the legs twined around mine, I feel so safe and comfortable that I fall, almost immediately asleep.

Elias from One by Leigh Ann Kopans

Hi, I am Louisse from The Soul Sisters and I am here to service all your Elias-related needs.


I think with the growing popularity of bad boys in both the YA and the NA scenes sometimes, we need a little good guy action. There's just something so special about "good boys" (and who's to say that they're always good anyway?) These are the types of guys we can depend on, lean to and are straightforward enough to not send us mixed signals. And Elias, is definitely one of those guys. I know you're really torn right now and you're probably like this:

And you're also probably thinking how evil we are to make you choose between the hottest guys of YA, but why don't I try to make your decision easier?

I honestly had this elaborate plan to do some pretty exciting things, I even thought of doing a rap... Here are a few of my sad attempts at it:

You can see why they were scrapped. I obviously have no future in the music industry... Sigh, I knew it was a pipe dream. It was after thinking of 20 more very pipe dream-ish ideas that I decided to just go with what I know best: writing. So, here I am! But before I woo you into joining Team ONE, here's a little something for the eyes: 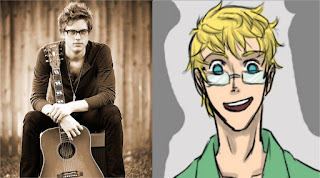 They say a picture is worth a thousand words, well here are two pictures. We live to serve your needs and if you're into cartoon-y characters, we have that too! If looking at a picture of a guy who closely resembles Elias isn't enough to convince you, then let me start talking.

If there's one thing I know girls love, it's a tall guy. There's this thing I call "nooking", it's when short-to-normal heighted girls place their heads in the space between a guy's neck and shoulders, and Elias is a perfect guy to nook with. And since he's gifted in the height department, tall girls are welcome to nook with him too! Come on, no person with ovaries can resist that. And don't get me started with his eyes! Don't let the glasses fool you, ladies. They're literally the type of eyes you can get lost into, the colors will mesmerize you; blue, green, brown and everything in between, who can look away? Who says dimples are abnormalities of the face? I've always been a huge fan of dimples, it's like a little gift when you see them on a person. Especially Elias, when you see this guy smile, it's like God is parting the clouds to fist bump you. Elias' smile was created to melt girls from across the world.

If that isn't enough to convince you, how about we talk this guy's deepness. Yeah, he may be a "jock" (he plays basketball) that doesn't mean he goes around bullying people and dating ditzy cheerleaders, Elias is actually a really smart guy. He can probably do your homework for you if you ask real nicely. *wink* But it isn't just his intelligence that makes him so attractive, it's that he's generally a great guy. He's nice to practically everyone and he's not one to judge. Elias makes everyone feel like they belong because he himself doesn't really belong. And, I'm pulling out my wild card here, he has a great relationship with his sisters. Whaaat? Bet you're surprised, aren't you? You hardly ever hear about a guy that has a great relationship with their siblings especially if they're twin girls. You can really see how much he cares about his sisters and his concern and love for them is so genuine that it will really warm your heart. Aaaand, that's not all. Elias is quite possibly the sweetest guy in the whole universe. Scroll down for more feels... *swoons*

But enough about all that fluff, let's talk about the serious *waggles eyebrows* stuff. Elias isn't just musically inclines (he can play a rockin' tune on the guitar,) he can also push air from his body. Now, I'm sure y'all are pretty confused as to why that's significant, well... it's because it helps him fly. Yup, you heard right, fly. Boom. There's the thunder. And if that's you're still not impressed, Elias has big hands and feet.  You're welcome.

Oh, and here's a little video presentation that will undoubtedly make your ovaries explode and your lip quiver:

Eeep! Thank you so much for reading and watching! *flails* Vote for Elias!

POLLS WILL CLOSE AT 12AM WEDNESDAY NIGHT/THURSDAY MORNING.
Posted by AmyG@YA-Sisterhood at 11:00 PM

Email ThisBlogThis!Share to TwitterShare to FacebookShare to Pinterest
Labels: jase vs elias, YA Crush Tourney, ya crush tourney #3, YA Sisterhood
Newer Post Older Post Home
Three sisters (and some honorary ones) share a love of YA literature, review new books, and talk old favorites.