The winner of Match #4 is Dimitri!

Dimitri from The Vampire Academy by Richelle Mead

Hello everyone! *Waves* Welcome to the 3rd Annual YA Crush Tourney! I am Chandra from Unabridged Bookshelf and I have the great honor of representing the esteemed Dimitri Belikov this year! If I seem familiar, you may have seen me here last year representing another fellow from the Vampire Academy and Bloodlines series by the incrediably talented Richelle Mead, Mr. Eddie Castile. I had a lot of fun last year, and could not be more excited to have the chance to be an advocate again let alone for the gorgeous guardian Dimitri.

Dimitri is the knight is shining armor girls have been dreaming about for years. He is protective, noble, always willing to put his life on the line for those he loves and those he has sworn to protect. He takes his duty as Guardian for the Moroi (good vampires) very seriously, especially after losing his first charge and his best friend to the Strigoi (bad vampires).Dimitri is a true gentleman and most defiantly crush worthy.

Dimitri is tall, dark, and dreamy all wrapped up in a Russian accent. Dimitri stands just over 6’7” with dark soulful eyes, and long dark hair and he is incredibly fit. Don’t believe me, why not find out what Ms. Rose Hathaway has to say about Dimitri’s looks.


“The other problem in my life is Dimitri. He's the one who killed Natalie, and he's a total badass. He's also pretty good-looking. Okay-more than good-looking. He's hot-like, the kind of hot that makes you stop walking on the street and get hit by traffic.
Rose Hathaway-Frostbite

Dimitri has many talents including making girls melt around him. He is a fierce warrior, and is admired by the entire Dhampir and Moroi world. When we first meet Dimitri in Vampire Academy he already has six Molnija marks which are given every time a Dhampir Guardian kills the evil Strigoi. He is a lethal machine who only softens ups around those he loves.


“Yet, it had been Dimitri’s gentleness and thoughtfulness mixed with that deadliness that made him so wonderful. The same hands that wielded stakes with such precision would carefully brush the hair out of my face. The eyes that could astutely spot any danger in the area would regard me wonderingly and worshipfully, like I was the most beautiful and amazing woman in the world.”
Rose Hathaway-Blood Promise.

As advocate, I am here to campaign for Dimitri and convince you of why you should vote for my favorite Dhampir. If the above has yet to convince you, then let me leave you with one final quote for you to ponder over.

Adam Wilde from If I Stay by Gayle Forman

Hello there YA fans, I'm Paige, and I'm here to tell you about Adam Wilde. But first, let me tell you about me: I have this this little blog which I recently renamed Nobody Asked Me (because let's be honest, my book reviews are rarely the result of someone asking me for a book review). I spend probably 50% of my waking life reading, constantly surprised to find that I have missed entire conversations, episodes of TV shows, and opportunities to go outside. Which I guess is what led me here. Twitter: @paigearoni_ Tumblr: charlottefairchild

But enough about me. I have a certain rock star to talk about.
(I'm not kidding about that, by the way. He is an actual rock star.)

Let's break down the pieces that make up Adam Wilde.

Personality: It's difficult to sum Adam up in words because he undergoes Quite A Change between the first book, If I Stay, and the second book, Where She Went. If I Stay Adam is endlessly supportive, steady, adoring and adorable. Mia describes him:

"But he was cool. Cool in that he played in a band with people who went to the college in town. Cool in that he had his own rockery style, procured from thrift stores and garage sales, not from Urban Outfitters knockoffs. Cool in that he seemed totally happy to sit in the lunchroom absorbed in a book, not just pretending to read because he didn't have anywhere to sit or anyone to sit with. That wasn't the case at all. He had a small group of friends and a large group of admirers."

He pays attention to Mia not because she's pretty or popular, but because she's so invested in playing the cello-- an instrument about which he knows next to nothing. What I love about Adam is that once he and Mia are together, they are a team. They've always got funny remarks for each other, but at the end of it all they're a serious couple (perfect example: "You don't share me, dumbass. You own me."). And when tragedy strikes, he's determined to be there for Mia and give her what she needs-- even if there's a chance she can't hear him, even if the doctors won't let him in, even if being there means going away and letting her move on without him. "I can lose you like that if I don't lose you today. I'll let you go. If you stay." [Oh, and the boy practically speaks in song lyrics. He's a musician, the wonderful broody kind with words to melt your heart and melodies to break it.] 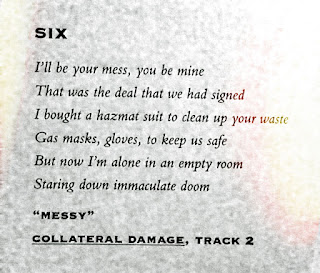 Where She Went Adam is a bit different, but equally crushworthy. His imperfections come out and through it all, he's still irresistible. Living with the consequences of what happened to Mia's family, he's pretty much dubbed himself Collateral Damage. In fact, that's the title of his band's second album, which became #1 on iTunes and bumped Lady Gaga out of the same slot on the Billboard charts. All of his success as a musician could only come from one thing: heartbreak. There's a piece of lead where my heart should beat, he sings in Track 12 of Collateral Damage. He never hesitated to give Mia what she needed after her tragedy-- space-- but he's still human, and it still hurts. He's bitter and needs to remind himself every day that he can get through it. But he does, because he knows he did the right thing for her. Even suffering the lonely life of a rockstar, having everyone tugging at him but the one person he wants to come back to him, he knows he'd make her that promise again. He'd let her go again if she needed him to, just to make sure she could keep living, healing and playing her music. Can you say selfless?

Best qualities: The best things about Adam are not the grand, large-scale things that make him so obviously swoonworthy, but the little things. It's not the fact that he's almost literally Mia's anchor to the world, but the fact that he puts headphones on her and plays her music while she's unconscious. That he rubs warmth into her hands when they're cold. That he performs an elaborate scheme to go see her in the hospital, and then races out of the room because it's so hard for him to see her broken. That he lets her teach him to appreciate a different kind of music from his own. Here, have some more words and let Adam's swoonworthiness speak for itself:

"Mia, Mia Mia. This is the you I like. You definitely dressed sexier and are, you know, blond, and that's different. But the you who you are tonight is the same you I was in love with yesterday, the same you I'll be in love with tomorrow. I love that you're fragile and tough, quiet and kick-ass. Hell, you're one of the punkest girls I know, no matter who you listen to or what you wear."

Looks: Gorgeous. Lopsided grin. I mean, let's just take a look at these fancasts, shall we?


VOTING IS NOW CLOSED.
Posted by Jennifer @ YA Sisterhood at 11:01 PM