THE WINNER OF MATCH #5 IS PERRY!

Perry from Under the Never Sky Series by Veronica Rossi

WHY HELLO YA CRUSHERS. I'm Nikki over at Fiction Freak and I am here to tell you just how amazing this guy right here is.

Yeah him? Know him? I'll fill you in.
Perry, our favorite Outsider, is perhaps one of the swooniest YA boys around. And, since I'm me, I'd rather show you than tell you. Be prepared to swoon at the quotes.

I asked a few friends on why they love Perry.
"1. His tattoo & his markings bc every time I picture it, I pretty much swoon." -@ _extroadiMARY
Oh my. You mean these?
"He had tattoos, just like in the stories. Two patterned bands around each bicep. When he'd turned his back, she'd seen another design on his skin, some sort of hawk with wings spanning shoulder to shoulder."
Yeah, I would love to touch see them too.

There is hot. And then there is Perry. You don't resist Perry."-@Kami178xx
Truest words ever tweeted. Blond hair, bright green eyes, and one sexy athletic body of course. What's not to love?

Personality
"There're lots of adjectives to describe him but passionate sums it all up -- w his bow, Talon, Aria -- everything".-@LPofimagination

“Your voice sounds like a midnight fire. All warm and worn in and golden. I could listen to you talk forever." "I could never do that". She laughed at him. He brought his lips to her ear. "Your scent is like violets early in spring," he whispered. Then he laughed at himself because though it was true, he sounded like the worst kind of fool.” -Under the Never Sky

Perry responding to Roar (best friend) - "What do you think we are?" and "You're better than a brother."

"He didn't miss once. His name was never sharper than when his blood was up."

"Vale wouldn't fight for Talon, but he would. He was Talon's only hope now."

Oh yeah. Passionate is definitely something you can call Perry.
Ah, but he's not only passionate. He's loyal and strong and supportive. He'll fight for whatever he believes in and for his people and he'll do whatever he can to help.

The Swoon
Now. Another reason you should totally swoon? He's romantic and sweet.
“In the afternoon, they stopped to eat on a rocky outcrop. Perry brushed a kiss on her cheek while she was chewing, and she learned that it was the loveliest thing to be kissed for no reason, even while chewing food. It brightened the woods, and the never sky, and everything.”

"Should we try this again?" he asked. Aria smiled. "The right way," she said, and wove her fingers through his. "Together."

And then...his kisses. Can I have one?

“He kissed her slowly. Everything went slowly so he could follow her temper, and search into her eyes. When they joined, her scent was brave and strong and certain. Perry took it into himself, breathing her breath, feeling what she felt. He'd never known anything as right.”

“Without thinking, he reached for her hand. Tucked it against her chest, feeling that was where it should be. Perry's heart slammed against his ribs. She had to feel it.”

“Perry's hand settled on her hip, his grip firm. She felt his kiss settle into something deeper as his mouth moved with more urgency over hers. Suddenly there was more heat between them...”

“His eyes were heavy with desire, but she saw something else. A gleam that made her suspicious.
"What?" she asked.
His hand slid to her hips. "You're incredible."
"That's not what you were thinking."

"Was so. I always think that." He leaned in, twisting a strand of her hair around his finger as he kissed her bottom lip.

When the heck do I get to be Aria?

"He smiled and leaned down, kissing her softly, tenderly. She knew she should step away. This was a risk, but she didn't care about anything except him just then. She wove her arms around his neck and parted his lips with hers, stealing a taste of him. Tenderness could wait for another time. Perry went still for an instant; then he cinched her close, momentum sending them thudding into the door behind him. He sank against it, bringing himself closer to her height, kissing her with a sudden urgency. With a hunger she matched. His lips moved to her neck, trailed up to her ear, and the world fell away."

"There are other things I'd rather do when I'm alone with you."

Mmmmm. Perry is definitely the swooniest. Oh, but don't only take my word.

[I love him] because he is my baby. Or is he my baby because I love him? Hmmm-Ananbelle
Bows and arrows and blonds, oh my! Perry is my ideal male protagonist and swoony hero because he is survival strong :)-Alyssa
He is an awesome, protective sexy beast.-Tahereh
You broke me in half when you left sweet Perry-Ammie

SO OMG GO VOTE FOR PERRY

I am so excited about being chosen and Torin St.  James Advocate.  My name is Catie and I blog @ Forbidden Passions Reviews.  I am so lucky to be the advocate of the most swoon worthy book character to be found in the pages of a book.  Torin maybe an Indie character but he is just so awesome.  Here is out Team Torin Cheer:
Torin, Torin,
He's our man.
If he cant do it
Than no one can!

Don't let the leather jacket and Harley fool you, Torin St.  James is a total romantic.
Though he is a stickler for rules, he bends them when an important person in his life needs him. He saved Raine when he wasn’t supposed to, yet was willing to give her up so she could lead a normal life with her parents. This showed how he is willing to put others before himself. Another example of self-sacrifice is when he made a deal to work for the meanest deities if they’d spare Raine. As you can see, once he has let you in, you’ll see that his bad ass front is just that, a front. He is truly a person that is worth being friends with.

“I’d never hurt you, Freckles. I would condemn myself to eternal servitude to Hel than harm a single strand of your hair.”


Do you like Harley-riding, leather-jacket-wearing, dead gorgeous guys with a bad attitude? If so, Torin is your guy. Amazing blue eyes, locks of black hair, and a charming personality no woman can resist. If you don't believe me, read it for yourself.
I took a step back. my pulse leaping. In one sweeping glance, I took in the strangers shaggy black hair, piercing Pacific-blue eyes under arched eyebrows, black leather jacket, and hip-hugging jeans. Either fate had conjured the poster boy of all my fantasies and deposited him on my doorstep or I was dreaming.
Even Cora, who secretly has a crush on someone else, appreciates Torin’s smoking good looks and bad-ass attitude. 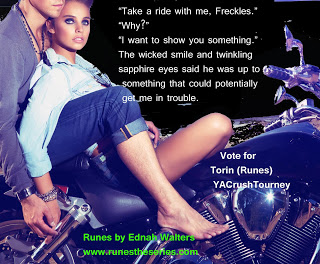 Talents:
He is a Valkyrie and has runic magic encoded in his body. When he engages certain runes, he can move at an accelerated speed, even when he’s riding his Harley. He can create portals through mirrors and walls using runic blade, acquire super-human strength or become invisible. He uses this latter ability to watch over Raine at the hospital after her surgery. Apart from his supernatural talents, Torin is good with his hands. He loves motorcycles and has owned one since the first motorcycle was invented (that should give you a clue as to how old he might be). He loves nothing better than to dismantle engines, modify them and put them back together. Who doesn’t like a guy who’s not afraid of dirt and grease? The best part is yet to come: he’s an amazing cook and likes nothing better than make something special for the girl he loves.
Special Attributes/ Best Qualities:
Are you still not sure about voting for Torin? Here is more. He doesn’t do anything by half measure. When you’ve earned his loyalty, you can count on him, period. He worked for Hel with his partner Andris after Andris screwed up. Even soul-reapers screw up. When Torin falls in love, it is the burning, all-consuming passion that cannot be contained. A natural-born leader, he brings out loyalty in the others. He is brave and has no problem taking on powerful deities for his friends.

He is cocky, yet sensitive, funny without being goofy. He can be very naughty and blunt about certain things.
"If I marked you Freckles, I'd be under your skin. You wouldn't think of anything or anyone but me twenty-four-seven. 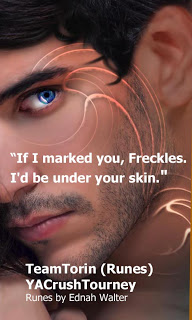 On top of all of that- he is a romantic and a total sweetheart. 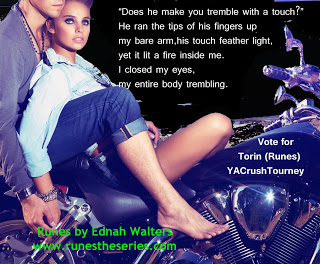 
-He’s willing to bend rules to help those he cares about.

If you haven't yet read Runes, this amazing first book in a new series dealing with the Norse Pantheon, I highly suggest you do. In the meantime, vote for Torin!

Thanks again to the YA Sisterhood for hosting this amazingly fun tournament and to Monica and Jennifer for their help!

POLLS ARE NOW CLOSED.
Posted by AmyG@YA-Sisterhood at 11:00 PM

Email ThisBlogThis!Share to TwitterShare to FacebookShare to Pinterest
Labels: 3rd Annual YA Crush Tourney, perry vs torin, perry ya crush, runes by ednah walters, torin ya crush, under the the never sky by veronica rossi, YA Crush Tourney, ya crush tourney #3, YA Sisterhood
Newer Post Older Post Home
Three sisters (and some honorary ones) share a love of YA literature, review new books, and talk old favorites.