And the Winner is....Four!
Welcome to The YA Sisterhood's 3rd Annual YA Crush Tourney!  We hope that through this all you will meet a lot of book loving people, discover new books, and of course be introduced to many more dreamy crushes!

Four/Tobias from Divergent by Veronica Roth


“Two things you should know about me; The first is that I am deeply suspicious of people in general. It is my nature to expect the worst of them. And the second is that I am unexpectedly good with computers.”


Now make sure to VOTE for Four as much and as often as possible and let's take Four to the top of the YA Crush Tourney!  :) Show your support on Twitter, Facebook, your blog, etc. You can follow me on Twitter at @GeckyBoz and make sure to use the #TeamFour tag so I can see all your tweets.

Cole from Everneath by Brodie Ashton

I am completely honored to be an advocate for the YA Crush Tourney and even more honored to be able to represent Cole. After having finished Everbound early this year my crush from him went from a maybe 3 (on a 1-10 scale) to being about a 9.5 – so I’m thrilled to fight for him in this fun tournament. I have been blogging for almost two years and have been enjoying every minute of it. I’ve loved these tournaments and have actively voted for boys I was super passionate about. Now I get to be one of the people fighting for votes and I can’t wait for it to begin! Cole is considered Everneath’s resident bad boy. Personally, I feel like he’s not that bad just mostly misunderstood. One third of a love triangle and definitely the most interesting aspect. We have his competition, football jock and ex-boyfriend, Jack. But honestly, you can’t even compare Cole to Jack. Plus, we’re not here to bore you by talking about Jack, now are we? This is all about Cole; Cole, who is sexy as hell, is also immortal and in a band as the kickass guitarist. Seriously, his guitar skills are legendary.

Cole used Nikki, it’s as simple as that – to begin. Cole needed Nikki for survival but then things changed for him. We start to see that Cole does, in fact, have a heart (even if it’s hidden somewhere else). This is where we start to see just how misunderstood of a character he is. He’s ancient; he’s always used humans for himself and had no reason to ever get attached. But we all know, all it takes is the right person to come along and your world could be turned upside down. His personality is one that may grow on you over the books but once he does, he’s like that itch under your skin that just won’t go away. The best kind of itch you could ever ask for, mind you. He’s charming . . . when he wants to be. He’s handsome and the greatest thing about that, he doesn’t age. At all. His beautiful blonde hair with his mysterious dark eyes that just lure you in; trust me. His tattoos which just confirm his bad boy mantra – especially those knuckle tattoos. This list is filled with good boys who are charming with good looks. Isn’t it time to prove that saying right; good guys finish last? Help the bad boys take charge and show everyone whose boss. It’s about time we stirred things up in the fictional world and voting for Cole is the way to get it done. 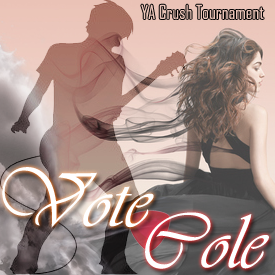 POLLS WILL CLOSE ON WEDNESDAY NIGHT/THURSDAY MORNING AT 12AM.
Posted by AmyG@YA-Sisterhood at 11:00 PM

Email ThisBlogThis!Share to TwitterShare to FacebookShare to Pinterest
Labels: four vs cole, YA Crush Tourney, YA Sisterhood
Newer Post Older Post Home
Three sisters (and some honorary ones) share a love of YA literature, review new books, and talk old favorites.