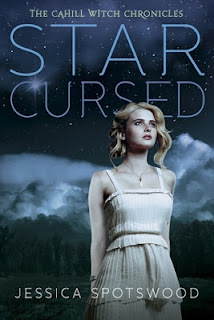 
This is by far my favorite series that centers around witches.  I love how Jessica weaves magic into a world full of prejudice and fear—a world rife to explode at any moment.  Fans of Born Wicked will find themselves on the edge of their seats—watching and waiting for the oracle to come forth, for love to be discovered, and for a war to begin.


My favorite aspect of this series is the setting.  I love the picturesque setting of quaint towns on the brink of a new century coupled with the tension and paranoia that bubbles through those very streets.  I’ve always been fascinated with historical tragedies such as the witch trials and Salem, and Jessica does very well in showing how a small spark of fear can catch hold and become an inferno.  The terror and suspicion is evident in every action, every word, and every character.


I still love Cate as a main character, and what I love even more is that Jessica doesn’t hold true to the ya stereotype that the main character is the most important one.  It makes it so that the story is told from a different point of view in a sense.  I thought this made Cate even stronger character because everyone has been looking to her for guidance, so she knows the pressure of what is expected.  SPOILER:  We get a very strong hint as to who the prophesied witch is at the end of Born Wicked, and I got frustrated that the beginning of this book acted like the final scene in BW never happened.  It was like everyone (including Cate) didn’t have any clue as to who the prophesied witch actually was.  It kind of made me feel like Cate was a bit daft in the head.


Maura was just as infuriating as ever, which is a good and bad thing.  It was great because you know an author has written a character well if you wish that you could grab the girl’s hair and pull as hard as you can just so she can get a small glimpse of the pain she causes.  But, then it’s a bad thing because I truly loathe her.  She’s nieve, obnoxious, reckless, prideful, and just plain mean.  One might say she suffers from the “quintessential middle child syndrome” but I think that’s a bunch of quackery because I’m a middle child and I’m not a crazy, hateful (insert bad word).


Finn was just as delightful as ever, and I found myself disappointed that he wasn’t in more scenes—especially since his scenes are so yummy!  I loved the protective side of Finn; and on more than one occasion I just wanted Cate to run away with him and forget about the rest of the world.  But of course Finn is too honorable for that (I keep wanting to say Flynn because my son is watching Tangled!).


The pacing of the book was up and down for me.  I felt like everyone was constantly on the edge of a cliff, teetering and almost falling over.  The problem was they were there for the entire book, and it got to the point where I just wanted something big to happen to start the impending war.  Something big does happen, but it’s not until the last 3 pages.  I wanted more action, more magic.


Overall, this was a great sequel, even though it did, at times, fall into the 2nd book slump.  But the bang of an ending makes up for it, and I am so ready for their world to implode.  Allegiances have been declared, deceit has been unmasked, and the war has started.
a Rafflecopter giveaway
Posted by Jennifer @ YA Sisterhood at 12:01 AM