After Obsession by Carrie Jones and Steven Wedel 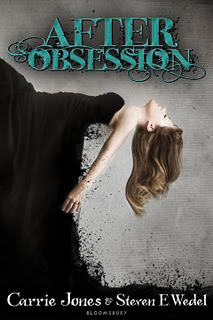 Aimee and Alan have secrets. Both teens have unusual pasts and abilities they prefer to keep hidden. But when they meet each other, in a cold Maine town, they can't stop their secrets from spilling out. Strange things have been happening lately, and they both feel that something-or someone- is haunting them. They're wrong. Despite their unusual history and powers, it's neither Aimee nor Alan who is truly haunted. It's Alan's cousin Courtney who, in a desperate plea to find her missing father, has invited a demon into her life-and into her body. Only together can Aimee and Alan exorcise the ghost. And they have to move quickly, before it devours not just Courtney but everything around her. Filled with heart-pounding romance, paranormal activity, and rich teen characters to love-and introducing an exciting new YA voice, Steven Wedel-this novel is exactly what Carrie Jones fans have been waiting for. Meet your next obsession.

First things first, how gorgeous is that cover? So gorgeous! It grabbed me (Yes! Literally accosted me!) while I was browsing in my local bookstore, which led me to read the back of the cover, which led me to read the inside flap, and then one thing led to another and now here we are. In the past I’ve regretted some of my “impulse buys” but let me tell ya, I do not regret this one folks! This book isn’t without its problems, but it is definitely a fabulous read full of originality, suspense, and sweetness.

After Obsession is told in a split narrative between Aimee and Alan. Aimee has lost her mother, has a supernatural ability of being able to heal people, and is thought of as a freak by most of her schoolmates (except for her best friend Courtney and boyfriend Blake) due to an incident that happened earlier in her childhood. And Alan is the new kid, who’s extremely athletic and is part Navajo Indian, which is a heritage he explores and connects with. I’m actually a fan of split narratives, but even though Aimee’s sections were written by Carrie Jones and Alan’s by Steven Wedel, I found their voices sounding very similar which was slightly disappointing as I would’ve really liked to have been able to connect with both of them separately instead of feeling that they were just an extension of the other. That being said, I found all of the characters in this book very captivating, and I grew to love them all.

Aimee’s friend Courtney has recently lost her father. She is (understandably) utterly and completely heartbroken and distraught with grief. Alan is her cousin and he and his mother moved to be with Courtney and her Mom to help them with their financial situation. But in Alan’s first days there, things begin to change. People start getting meaner, as though PMS was a contagious virus and the entire town had caught it, and Courtney’s behavior turns especially nasty. I’ve read lots of books about/with demons, but never a novel about possession, so I was very intrigued to see exactly how the subject matter was going to be handled, and it did not disappoint. I cannot say too much for fear of being spoilery, but it kept me interested and on edge (the good kind) throughout the book.

There were so many things that really made this novel outstanding. I really liked that we saw Alan explore his heritage and in the process learned a lot about the Navajo Indian culture. I enjoyed the whole myth and idea of the River Man and how he affected people. I loved that Aimee took an absolute zero-tolerance attitude toward racism in spite of the negative consequences that she faced because of it. This book also showed that it is important to not stay in a relationship just because it is comfortable or because other people might judge you for getting out of it. Most of all, I absolutely loved the love that was shown for a friend. Love is more than just a word, and is applicable to others besides romantic interests and family. I personally have friends that I consider to be my family and I know that I would go to Hell and back to help them if I needed to. Aimee does exactly that for her friend and I like how this book explored that friendship.

With all of the good things about the book, there were some things that could’ve made it a better-told story. I’ve mentioned the similarity of the protagonists’ voices, and I also wish it had been explained to the reader exactly how the River Man was “invited” in. I feel that would’ve cleared up some plot-holes and would’ve just been a really interesting scene to be a part of. I also felt that Alan was to “perfect” and that the romance that takes place was extremely rushed and seemed almost forced. It would’ve been better (especially if there are more books to follow) if they had taken the time to really get to know each other and had some peace before just jumping in to a relationship.

All in all, I really enjoyed this book and I’m sure I will revisit it at some point. This novel works well as a stand-alone, but it could also work as a series. I, for one, hope it is the first of a series, because I would love to see how some of these characters develop and see what they could get into next. I know most people think of The Exorcist when they think of possession, but After Obsession is really more creepy than scary so no one needs to fear nightmares because of reading it. If you’re pulled in at all by the summary, give it a try, you might just find yourself a new obsession! (sorry I had to)
Posted by Marylee at 12:01 AM