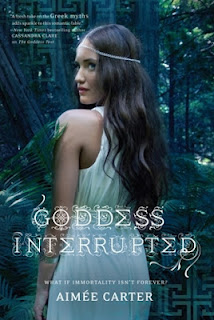 Kate Winters has won immortality. But if she wants a life with Henry in the Underworld, she'll have to fight for it.Becoming immortal wasn't supposed to be the easy part. Though Kate is about to be crowned Queen of the Underworld, she's as isolated as ever. And despite her growing love for Henry, ruler of the Underworld, he's becoming ever more distant and secretive. Then, in the midst of Kate's coronation, Henry is abducted by the only being powerful enough to kill him: the King of the Titans. As the other gods prepare for a war that could end them all, it is up to Kate to save Henry from the depths of Tartarus. But in order to navigate the endless caverns of the Underworld, Kate must enlist the help of the one person whom she would really rather not meet. Henry's first wife, Persephone.

I started reading The Goddess Test yesterday and the moment I was done, I went straight for my ARC of Goddess Interrupted.  I was excited to see how Kate and Henry’s romance was going to continue to unfold.  While the action in the novel was great, and I loved getting to see deeper into the psyche of the Gods, I was somewhat disappointed in the romance between Henry and Kate.  There was so much angst that at times I wanted to jump straight into the book (if only I had magical powers) and slap them both in the face and scream, “Come on!  Get it together and kiss already!  Quit wallowing in self-pity!”  However, no matter how many times I wished for Harry Potter powers, I found none, so I just continued to grumble to myself.
That doesn’t mean that I did not enjoy the book.  On the contrary, I cannot wait until the next book comes out; I just hope that Aimee Carter will give my heart a break and inundate me with some great kissy romance scenes.
So what did I like?
Even though the romance aspect was very tense, I still liked Henry.  What can I say?  I’m a sucker for a broken, broody guy whose eyes flash with love every so often.  No matter how cold and distant he gets, I’d still rule the Underworld with him!
The evil in this book is so extreme that I am still reeling.  Calliope—grrrr!  That’s all I can come up with!  She’s beyond evil—full of hatred and misery and determined to take everyone down with her.  That’s what makes the action so overwhelmingly great…I was on the edge of my seat waiting to see when she was going to attack again.  (There are no spoilers here…you see Calliope’s plan in the first 2 pages).
But Calliope is not the only evil that Kate must face—even worse…she has to face Persephone.  Not that Persephone is evil, but let’s face it; having to enlist the help of the woman your husband is still in love with would make anyone a little furious.  I really enjoyed the insight into Persephone and Henry’s relationship.  It made me understand (somewhat) why Henry acts the way he does—cold and distant.  Though I still wish that Aimee Carter would have given the angst a break, I did enjoy seeing how Henry’s past relationship starts to define his present one.
What did I dislike?
Again…the angst.  We see very little emotion from Henry (I know, he’s Hades, he has to be cold).  I would have liked to see him cave to his emotion, even once to give another layer to his character.
Not that I disliked the ending…it’s more that I dislike having to wait to find out what happens!  This cliffhanger ending will make you want to scream even louder than the infamous Soprano ending!  To me, there is nothing worse than not knowing!  But I guess in the world of young adult, I must get used to the cliffhanger-break-my-heart-and-stomp-on-it endings.  I’ll just say this—I need an ARC of the next one, please!!!!!!
So….
I did fall in love with Aimee Carter’s world.  She gives us and entirely new idea of heaven and hell.  She creates a world where lies, betrayal, hatred, and envy are overwhelming and can only be combated by truth, loyalty, and love—things so few are willing to give.  Take a trip to Aimee Carter’s Underworld, and like me, you might not want to return.
Posted by Jennifer @ YA Sisterhood at 12:01 AM