Insurgent by Veronica Roth
Published by Katherine Tegen Books
On shelves May 1st, 2012
Reviewed by: Big, Middle and Baby Sis
Sister's Say:  This installment of the Divergent Series is filled with dramatic events that will torment and cement your excitement of this figment of Veronica Roth's imaginationment! 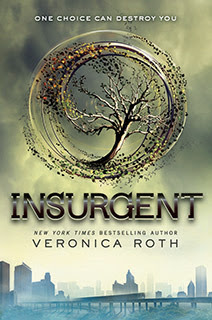 One choice can transform you—or it can destroy you. But every choice has consequences, and as unrest surges in the factions all around her, Tris Prior must continue trying to save those she loves—and herself—while grappling with haunting questions of grief and forgiveness, identity and loyalty, politics and love.

Tris's initiation day should have been marked by celebration and victory with her chosen faction; instead, the day ended with unspeakable horrors. War now looms as conflict between the factions and their ideologies grows. And in times of war, sides must be chosen, secrets will emerge, and choices will become even more irrevocable—and even more powerful. Transformed by her own decisions but also by haunting grief and guilt, radical new discoveries, and shifting relationships, Tris must fully embrace her Divergence, even if she does not know what she may lose by doing so.

Oh Insurgent how I love thee, let me count the ways!  I know we said this last year with Divergent, but we are going to say it again for Insurgent, THIS IS THE BEST BOOK OF THE YEAR!!!  Veronica Roth has out done herself with Insurgent, if that is even possible.  Nothing about this book falls into the 2nd book slump.  In fact, it might have completely OBLITERATED it!

Insurgent really digs down into the nitty gritty of humanity.  It is rampant with betrayal, grief, guilt, violence, prejudice, torture and depravity.  Get ready to get slapped in the face with emotion.  I was honestly in constant terror as I read this book.  I didn't know who to trust.  At one point, I didn't even know if I could even trust Tris or Four.  The emotions are so high, and so many decisions were based on these emotions, I didn't know who to put my faith in.   Veronica definitely does not shy away in the face of war.  She even caused my own emotions to war against each other.  She gives us a true depiction of what I imagine war to be like, mother against child, friend against friend, never being able to trust a single soul.   There were times at which I felt like my heart had been ripped from my chest and other times at which it melted into complete mushiness.

Tris is amazing in this book!  I loved being inside of her head and seeing how she faced and dealt with the harrowing situation that was thrust upon her.  My heart broke for her as I watched her struggle with the grief and fear of losing her parents, both her factions and the world that she had been raised in.  She bravely faces down debilitating circumstances and makes choices that no one should ever have to face.  Tris matures, grows and actually becomes braver, smarter and more selfless through it all.  She embraces her divergence.

FOUR!  That's pretty much all I have to say, and I've already sold everyone on reading this book!  We loved him in Divergent, but you will fall even harder for him in Insurgent.  Tris and Four fell in love in Divergent, but adversity many times leaves people changed.  So much of this book was a picture of Four and Tris finding their way back to each other through the fall out that Divergent left them with.     They worked hard and fought for their relationship, and we as the reader saw them going from a "me and you" to an "us".  They proved themselves to be dauntless even in the face of love, sometimes the scariest thing of all.

In Divergent, we see a huge part of Dauntless and Abnegation.  In Insurgent, we are introduced to all the other factions.  We see their leaders, what motivates them, and how they are trying to find their place in the midst of this war.  We also are given a first hand introduction into the world of the factionless which happens to be one of my favorite parts of the book.

This review was really hard to write because nothing I can say will ever do Insurgent justice.  At one point in the novel, tears were streaming down my face while I was doing a fist pump in the air!  That pretty much sums up how I felt about this book.    She weaves words together in a way that leaves me breathless, crying and cheering all in the same moment!  One moment, her words are abundant and poignantly beautiful while the next they are sparse and shatteringly silent.  In both instances, she manages to pack a punch and use the words that perfectly represent the emotions of that moment.  It's a rare talent and one that leaves me speechless.  I bow down to you, Veronica, the Queen of YA Lit!