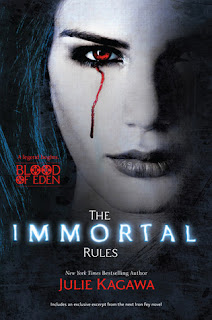 The Immortal Rules (Blood of Eden #1) by Julie Kagawa
Reviewed by: Baby Sister Brittany
ARC received from: Media Masters Publicity
The Sisters say: Bloody, Bold, Bad A
In a future world, Vampires reign. Humans are blood cattle. And one girl will search for the key to save humanity.

Allison Sekemoto survives in the Fringe, the outermost circle of a vampire city. By day, she and her crew scavenge for food. By night, any one of them could be eaten.

Some days, all that drives Allie is her hatred of them. The vampires who keep humans as blood cattle. Until the night Allie herself is attacked—and given the ultimate choice. Die… or become one of the monsters.

Faced with her own mortality, Allie becomes what she despises most. To survive, she must learn the rules of being immortal, including the most important: go long enough without human blood, and you will go mad.

Then Allie is forced to flee into the unknown, outside her city walls. There she joins a ragged band of humans who are seeking a legend—a possible cure to the disease that killed off most of humankind and created the rabids, the mindless creatures who threaten humans and vampires alike.

But it isn't easy to pass for human. Especially not around Zeke, who might see past the monster inside her. And Allie soon must decide what—and who—is worth dying for.
Julie Kagawa is an artist. Nay, she’s a master, no a genius.
Strike all of that.
JULIE KAGAWA MUST BE A FREAKING WIZARD BECAUSE IMMORTAL RULES WAS PURE MAGIC!
Too cheesy for you guys?
Let me rephrase—Julie Kagawa’s fresh and inventive take on the flooded vampire market is nothing short of inspired. I admit—I cringe every time I open a vampire book because it’s just so overdone, but I shouldn’t have ever doubted Julie! She has a knack for taking tired, overwrought mythologies and bringing them to life in a way that is at once both a reflection of the old and a push towards the new. She did it with fairies first (Yes, by the time I read Iron Fey I was sick of Fairies and she proved me wrong), and now she’s done it with Vamps.
Dear Ms. Kagawa,
I hearby hope, NAY BEG, for you to tackle every trendy and stereotypical paranormal creature there is. I shall never again doubt your prowess and your, erm, wizardry. I will follow you into the worlds of werewolves or zombies or witches or angels or mermaids or even freaking hobbits. I’m all yours. All Hail Julie!
Sincerely,
The One Who Doubted, and Deserves a Swift Kick in the Face Because of It
Now lets get down to specifics.
IMMORTAL RULES is a combination Dystopian/Paranormal—my two favorite worlds!  Essentially—Disaster befell the Earth and humankind’s number began dwindling rapidly. This = Bloody Awful News for the Vamps who had been secretly living among us the whole time (Pun intended). So, to prevent Vamps from dying out, they had to prevent human’s from dying out.
*Julie waves her magic wand*
Vampire cities are created. Human’s are kept in walled cities, protected from the outside world in exchange for their blood.
Genius, right?
Well… then there’s Allie—chalk up another hella awesome heroine for Ms. Kagawa. She lives in the outskirts of the vampire city, and has refused to pledge herself to the vampires and give up her blood. Unfortunately, that means she’s left to fend for herself, and food is almost as scarce as safety. But she doesn’t care… she despises the vampires, and refuses to give in to them.
Then her hatred for vampires is tested by her own will to live when she is attacked and she faces a choice—die or become a vampire (which is also dead, so it’s more like die or die 2.0).
Allie’s character is fierce and complicated and loyal and naïve and flawed and above all—RIVETING. I couldn’t get enough of her world and her life.
Luckily, this first installment in the Blood of Eden series is epic—and I mean that in the sense that it is both awesome and long! Can’t get much better than that, can we?
Allie isn’t the only fascinating character.
I love me some Kanin, Allie’s sire. He has all the broody self-hatred of reformed vampires, but is simultaneously at peace with his life as a vampire and his role as predator. He’s broody and bloody. Imagine Stephan and Damon from Vampire Diaries all rolled into one fabulous character. I will admit… I was more interested in Kanin than I was in Zeke (the love interest in the book), and I can’t wait to see more of him in later books.
That’s not to say I didn’t like Zeke—son of a religious leader hell bent on destroying the vampires, who falls in love with girl who just happens to be a vampire. Now that’s some DRAMA, kids. And trust me, as a theatre teacher—I KNOW DRAMA.

EDIT: And.... I can't believe I forgot to mention this. *Bad Brittany* Thanks to Misa for reminding me in the comments. Allie is Asian! Only the second Asian MC I've seen in YA lit! Huzzah for diversity in YA lit! Huzzah for Julie!
All in all, I loved this book. I love Julie Kagawa. Crap…. I even love vampires again (for a little while at least). So give this book a chance, maybe you’ll love again too!
In fact, we’re giving you a chance to win a copy of this book (which hits stores April 24th)! Check out the rafflecopter below for more info!