Friday started out just as any other day.  The sun was shining, the birds were chirping, the kids were screaming, and I needed caffine!  Then all of the sudden the door bell rang!  My first thought was..."HIDE, its probably a salesman!" (solicitors are popular in our neighborhood).  But, before I could yell out my command, my overeager son was already shouting from the door, "its a box!"  He opens the door, grabs the box only to have it ripped from his tiny hands instantly because this is what I saw: 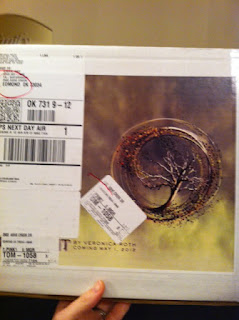 I then proceeded to jump around like an 8 year old going to Disney World for the first time or like my sisters and I at The Wizarding World of Harry Potter!  I gently, ripped open the box and this is what I found: 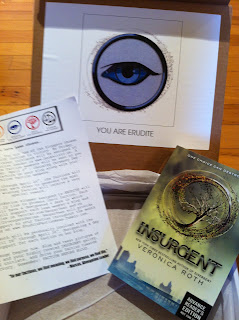 I then grabbed the Insurgent ARC and this is what I looked like:

And, yes, Harper Collins could not have placed us in a more accurate Faction!  We at the YA-Sisterhood are a bunch of smarty pants that would prefer a book to basically anything!  So we will say it LOUD and PROUD...WE ARE ERUDITE!!!
Now, we are looking for more ERUDITES out there to help us spread the word and win this faction war!!!  Harper Collins is holding a little, well more like HUGE, contest between the factions.  For the month of April whichever faction receives the most hits on their Faction Page will win the contest!!!  So please, spread the word by post this link: http://bit.ly/choose_erudite wherever you can!  We know ERUDITE can do this because we have the best followers in the world!!!  Let's treat this like one of our tournaments and spread the word!!! Do it for FOUR!!!!!
I saw this quote on our Faction Tumblr Page and I just had to reblog it here:
I am Divergent says:

It makes me sad that some people are ashamed when they find out they’re Erudite. Erudite isn’t a bad faction, it just gets a bad rep because of icky Jeanine. It’s like how everyone always says Slytherin is evil just because the majority of the house was on Voldemort’s side during the war. Well, I’m a Slytherin and I’m proud. So I see no reason why you can’t be proud of being an Erudite.

I LOVE, LOVE, LOVE THIS!!!  So, if you want to join our ERUDITE team and help us win this, leave your name, twitter, facebook, email, any way to get a hold of you, and we will let you know how you can help!!! Be sure in all your tweets to use: #DivergentNation and #ERUDITE.

Also, Pam over at Bookalicious, who is our Erudite faction leader, is hosting a giveaway for not 1, not 2, but 3 finished, signed and personalized copies of Insurgent!  How awesome of a giveaway is that?!?! So be sure to head over there and enter to win!
Posted by AmyG@YA-Sisterhood at 12:01 AM