A Temptation of Angels by Michelle Zink 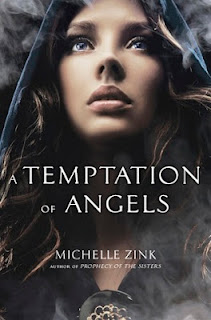 A Temptation of Angels by Michelle Zink

When her parents are murdered before her eyes, sixteen-year-old Helen Cartwright finds herself launched into an underground London where a mysterious organization called the Dictata controls the balance of good and evil. Helen learns that she is one of three remaining angelic descendants charged with protecting the world's past, present, and future. Unbeknownst to her, she has been trained her whole life to accept this responsibility. Now, as she finds herself torn between the angelic brothers protecting her and the devastatingly handsome childhood friend who wants to destroy her, she must prepare to be brave, to be hunted, and above all to be strong, because temptation will be hard to resist, even for an angel.


Thank you to Michelle Zink and Dial Books for my copy!  And what a gorgeous cover--her eyes just draw you right in!
Before I had my baby boy, I taught 8th grade Literature and all the students had to read novel outside of class each six weeks.  It was supposed to be something they would enjoy, and I found, that like me, many of my female students loved paranormal romance novels and they always wanted to know what book they should read next.  However, middle school libraries are very strict with what  books they will purchase; so many of the ones I had read would not have been found in our library.  But A Temptation of Angels would have been perfect for them as it was more middle grade than YA.  Michelle Zink creates a fun paranormal world, full of good and evil, angels and demons, love and betrayal.


So…I’ll start with what I enjoyed.  I was sucked in from Chapter 1 when Helen’s parents are killed and she is sent to Griffin and Darius.  I loved the mystery surrounding the murder and the mystique surrounding both of the brothers.  (I do wish I would have known how old everyone was—somehow that was left out and I felt like it should have been a big deal).  I really loved how Griffin became attached to Helen-wanting to protect her.


Their relationship was probably the best part of the book.  I love the small innuendoes that Griffin would put out there about wanting to be closer to her an enjoying their bodies flushed up against each other.  While I wanted more romance (and far more details), I will say that the romance was perfect for a middle grade book (like I had mentioned earlier).  I was sweet and subtle, with many romantic kisses, but nothing beyond that.  I do hope that the next books step up a bit on the steamy romance, though.


The blurb talks about Helen being caught between Griffin and Raum (the childhood friend), and that was something that really drew to want to read the book.  I love books where there is a good “bad guy.”  There was so much potential here, and I did like Raum, but I wish there would have been more of him.  I wanted to find myself screaming, “Who should she choose??”  But, I found myself strictly in the Team Griffin territory because there wasn’t enough intensity between Helen and Raum.  I’m crossing my fingers that there will be in the next installment.


I enjoyed the world that Michelle set up, although I wish there would have been more details about the world and less about Helen’s normal, everyday actions.  I found myself wondering about the time period—it was obviously in the far past (like the 1800s) because it was inappropriate for Helen to be seen holding hands with Griffin.  Plus, she had to take a bath in a basin in her room.  But, beyond that, there wasn’t much detail about the world.  I would have loved to have seen more into the reality around Helen.   On the other hand, there were too many details about Helen’s simple actions—walking from place to place, hiding in corners, etc.  I felt that the book could have easily been 50 pages shorter without all the extra simple details.


Overall, this was a fun and quick read that I know the younger YA crowd would enjoy.  Personally, I like more steam and more fierce action that what was there, but I still enjoyed the relationships and idea of the world.  I would recommend this book to anyone who has a younger teenage girl who enjoys paranormal romance books.
Posted by Jennifer @ YA Sisterhood at 12:01 AM