Hey everyone! My name is Stacey, and I'm the blogger behind the Fantasy Book Addict. This is my first time participating, and I'm so excited I get to represent Dimitri Belikov from the international bestselling series, Vampire Academy, by Richelle Mead. Before I begin, I'd like to thank all the supporters behind #TeamDimitri, and the YA Sisterhood for hosting this fun tourney! Now, let's get started!

Tell us about Dimitri?
Well, he's a twenty-four-year-old dhampir with a sexy Russian accent. He's about six-six or six-seven with dark brown eyes and shoulder-length brown hair that's usually tied back in a ponytail. He's one of the best and most respected of all the dhampirs. When we first meet him, he has six molnija tattoos onthe back of his neck because he has killed 6 strigoi. Rose actually says it better than I can here:
“He's a total badass. He's also pretty good-looking. Okay-more than good-looking. He's hot-like, the kind of hot that makes you stop walking on the street and get hit by traffic." Frostbite

What makes him stand out amongst the other competitors?
Unlike many guys on this list, his looks aren't the best part of him. He's hot for sure, but he's not a total jerk. He's a sexy, good guy. I'm gonna lean on Rose again to explain: "Yet, it had been Dimitri’s gentleness and thoughtfulness mixed with that deadliness that made him so wonderful. The same hands that wielded stakes with such precision would carefully brush the hair out of my face. The eyes that could astutely spot any danger in the area would regard me wonderingly and worshipfully, like I was the most beautiful and amazing woman in the world.” Blood Promise

What truly makes Dimitri the best crush on this list?
When everyone else thought Rose was a lost cause, he believed in her. He trained her and he took up for her. He was always pushing her to be her best. His support helped elevate her into the rockstar dhampir she eventually became. No matter what happened to Rose, he never lost faith in her. Not to mention, he thought her most attractive trait was her inner strength. Dimitri: "No, it won't happen to you. You're too strong. You will fight it, just like you did this time" Rose: "I only did it because you were here, I can't do it by myself" Dimitri: "You can, you're strong--you're so, so strong. It's why I love you." Shadow Kiss

Still not convinced of his hotness? Maybe this will seal the deal. <Holy Hotness Alert>
"Releasing my wrists, he moved his hands up my arms, sliding slowly along my skin. Holding me in his dark, hungry gaze, he pulled me into him, pressing me right up to his body. One of his hands moved up the back of my neck, twining his fingers in my hair and tipping my face up to his. He brought his lips down, barely brushing them against mine. Swallowing, I asked again, "Do you think I'm pretty?" He regarded me with utter seriousness, like he always did. "I think you're beautiful." "Beautiful?" "You are so beautiful, it hurts me sometimes." His lips moved to mine, gentle at first, and then hard and hungry. His kiss consumed me. His hands on my arms slid down, down my hips, down to the edge of my dress. He gathered up the fabric in his hands and began pushing it up my legs. I melted into that touch, into his kiss and the way it burned against my mouth. His hands kept sliding up and up, until he'd pulled the dress over my head and tossed it on the floor. "You...you got rid of that dress fast," I pointed out between heavy breaths. "I thought you liked it." "I do like it," he said. His breathing was as heavy as mine. "I loved it." And then he took me to the bed." Vampire Academy

Hey there! I'm Mag from Geek Chic, and I'm super duper excited to get to tell you all about the AMAZING Archer Cross! He lives inside an awesome series called Hex Hall, by Rachel Hawkins. What makes him so awesome, you ask?

Archer Cross is that guy you hate and love at the same time. He's arrogant, sarcastic, obnoxious...and irresistible. He always has a smart remark or witty comeback ready, which can be both hilarious and infuriating. He's the kind of guy that leaves you sputtering in his wake, struggling to come up with something clever to say back.


"You know," someone said off to my left, "I usually find a blocking spell to be a lot more effective than yelling 'Bad dog,' but maybe that's just me." 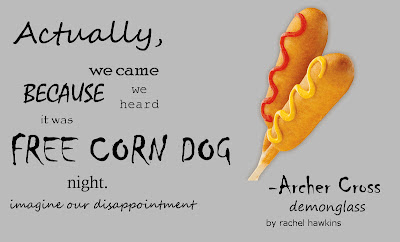 But Archer has a sweet side, as well, especially when it comes to Sophie, who seems to be one of the only things he cares about.

"I've spent basically my whole life pretending to be someone I'm not, faking some feelings, hiding others." Reaching down, he clasped my hand and lifted it so that our joined hands were trapped between our chests. "This thing with us is the only real thing I've had in a long time. You're the only real thing. And I'm done pretending I don't want you."

And when he'd pulled me closer and murmured, "Mercer, I love--" I had covered his mouth with my hand.
"Don't say that. Not now. Say it sometime when there is absolutely no chance of death on the horizon, okay?"
He mumbled something beneath my palm, and I rolled my eyes as I pulled it away from his mouth. He dropped a kiss on the tip of my nose. "All I was going to say was that I love this tent you made for me. But I guess I can tell you again later. When you get back."

Archer is tall and lean, with curly dark brown hair and dark brown eyes. He's the guy every girl's got a crush on, and it's easy to see why.


"What, you don't do tall, dark, and handsome?" -Sophie Mercer

Archer's a warlock, which means he has some pretty cool magical powers.


Then, out of the corner of my eye, I caught a flash of blue light on my left. Suddenly, the werewolf seemed to smack into an invisible wall just inches in front of me. Giving a pitiful bark, he slumped to the ground.

He can also kick butt in hand-to-hand combat, and he's got some skills with a sword! How awesome is that??

Then viselike fingers clenched my throat, the stake was wrenched from my hand, and a sharp stabbing pain shot up my right thigh as I landed on the ground with a thump that knocked the breath out of me.
And if that wasn't bad enough, once I landed, something hard and heavy--his knee, I thought--hit me right in the sternum. You know, just in case there was one last breath left in my lungs. The point of the stake scraped the sensitive skin just under my chin. I looked up, wheezing, into Archer's face.

There was a burst of movement out of the corner of my eye, and suddenly, he wasn't beside me anymore, but in the thick of them, sword flashing. He caught one of the ghouls under the chin with the point of his blade, but there was no blood. The thing stopped moving, but it didn't fall. Instead, it swept a hand at Archer like he was an annoying mosquito. But Archer ducked and swung again, piercing the side of the second ghoul.

But I think the skill you're probably most interested in would be...kissing. And trust me, Archer has got some skills there! 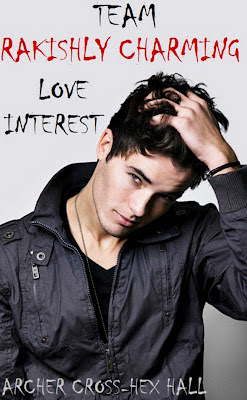 For a few charged seconds we froze, glaring at each other, breathing hard. I saw his eyes darken just a little, like Jenna's had the day she'd seen my blood. But this was a different kind of hunger; one I felt too.
I didn't let myself think. I just leaned forward and pressed my lips to his.
He took a split second to respond, but then he made a sound almost like a growl from low in his throat, and his arms were suddenly around me, holding me so tightly I could hardly breathe. Not like I cared. All I cared about was Archer, his mouth on mine, and his body pressed against me.

As I said, he's a warlock, he's sarcastic, and he's super hot...But what are Archer's best qualities, really? Well, if you've read Hex Hall, you know that Archer was hiding a PRETTY BIG and PRETTY BAD secret. But I think something that shows what a truly good guy Archer is is how much he cares about Sophie, and how much he risks and sacrifices for her. His feelings for Sophie, and the ways he shows them-- I'd say that's one of Archer's best qualities.
Anything else?