Teaser Tuesday is a weekly meme hosted by MizB over at Should Be Reading!
To participate all you have to do is:

•Grab your current read
•Open to a random page
•Share "teaser" sentences from somewhere on that page
•BE CAREFUL NOT TO INCLUDE SPOILERS! (make sure what you share doesn't give too much away! You don't want to ruin the book for others!) 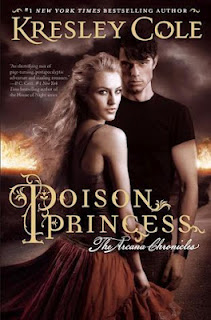 "'If you touch me like that again, Evangeline,' he began in a husky tone, dropping to his seat once more, 'in the space of a heartbeat, I will have you off this bike and onto the closest horizontal surface.  And I woan be picky, no.'" ARC, pg. 226

"Suddenly, Matthew shot upright, face paling.  'Death sends his regards.'  At once Selena turned down the music.  I saw Jackson's eyes narrow in the rearview mirror.  Matthew asked, 'Why aren't you preparing for death, Evie?  You know what the future brings."  ARC, pg. 297

"The red witch stood atop a raised dais overlooking a crowd of shadowy figures.  Villagers.  They cowered before her.  Aggression sizzled through her veins as she surveyed them.  She would destroy them all, every last one, her wratch unfathomable."  ARC, pg. 139

This book was beyond words!  I'm going to even go futher and say that it is my favorite book I have read so far this year.  I loved that the plot and the characters were nothing....I mean nothing! like I have ever seen before.  They were fresh and full of life (or death).  Her writing sent chills down my spine--good chills from the hot and angry Jack and bad chills from the terrifying characters that haunt the apocalyptic landscape!  The entire story was on a whole different level of new!  Kresley Cole is a master at creating a dark world where even monsters might find themselves afraid!  Do not miss out on this one!
Posted by Jennifer @ YA Sisterhood at 12:02 AM