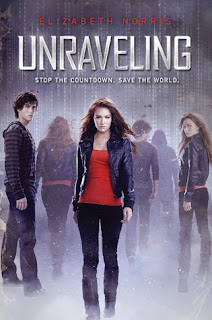 Unraveling
by Elizabeth Norris
Reviewed by: Baby Sister Brittany
The Sisters say: Unique, Unbelievable, Unputdownable
Two days before the start of her junior year, seventeen-year-old Janelle Tenner is hit by a pickup truck and killed—as in blinding light, scenes of her life flashing before her, and then nothing. Except the next thing she knows, she’s opening her eyes to find Ben Michaels, a loner from her high school whom Janelle has never talked to, leaning over her. And even though it isn’t possible, Janelle knows—with every fiber of her being—that Ben has somehow brought her back to life.

But her reincarnation, and Ben’s possible role in it, is only the first of the puzzles that Janelle must solve. While snooping in her FBI-agent father’s files for clues about her accident, she uncovers a clock that seems to be counting down to something—but to what? And when someone close to Janelle is killed, she can no longer deny what’s right in front of her: Everything that’s happened—the accident, the murder, the countdown clock, Ben’s sudden appearance in her life—points to the end of life as she knows it. And as the clock ticks down, she realizes that if she wants to put a stop to the end of the world, she’s going to need to uncover Ben’s secrets—and keep from falling in love with him in the process.
UNRAVELING had it all—action, suspense, romance, emotional turmoil, mystery, science, and an impending apocalypse. I mean, really, what more can you ask for? This book will be great for fans of the TV Show Fringe! It’s got a weird/wacky scientific side plus the crime scene investigation fun-ness! Note: I’m not calling crime scenes fun, but the TV shows about them… you get that, right? NM… moving on. J
Right from start, this book doesn’t pull any punches. It opens with the MC, Janelle, getting hit by a truck.
Got your attention, huh?
But that’s not all—Elizabeth Norris makes so many bold choices in this book. She’s not afraid to throw in tortuous twists and turns that leave us and her characters scrambling to make sense of things. I LOVE when authors are brave enough to put their characters through really difficult things. I can’t tell you what those DIFFICULT THINGS are… but man are they DIFFICULT.
There were several times while I was reading this book where I stopped and said, “WHOA. I can’t believe she just did that. Wow! SHE JUST DID THAT!”
So, obviously, this book was surprising. I’m a sucker for a book that surprises me. Now, that’s not to say I didn’t figure some things out earlier than Janelle, but there were enough big surprise moments still happening that it didn’t bother me all that much.
The romance between Janelle and Ben was just right. It didn’t take over the story, but I wasn’t left feeling unsatisfied. I thought Norris hit the perfect balance between action and romance.
I, for one, can’t wait for the next installment in this series. DANG IT. I just realized that I don’t even know if this is a series! I even went and checked the sale on PublishersMarketplace. It definitely only sold as one book. But that doesn’t mean there won’t be a sequel, right? RIGHT? It’s certainly possible that it could be a stand-alone, but I hope not! I need more Janelle/Ben! I need to know more about this universe! ACK.
Well… that ought to tell you how much I loved this book. I will be so sad if there isn’t a continuation!
Posted by Brittany Howard at 12:01 AM