If you don't already know, the amazingly crushable Adrian Ivashkov is being represented by me, Anna Tee from The Bursting Bookshelf. Adrian is from The Vampire Academy series and the Bloodlines series by the hugely talented Richelle Mead. If you want to stay up to date on how Adrian is doing in the Tourney or to just support him, please check out my Twitter and use the hashtag #TEAMADRIAN. Before we begin, I'd just like to thank the YA Sisterhood for hosting this event! WARNING, MINOR SPOILERS BELOW.

Personality:
If you've read the Vampire Academy books and Bloodlines ones, you already know that Adrian is the perfect embodiment of a good guy with a bad boy exterior. Even though the bad boy front is very appealing (and I do mean very appealing), the fact that he is willing to stand up for others (take Jill for example- he's fiercely protective of her in a big brother sense) and that he doesn't fall for all the lies involved in the Moroi royal court.
Though he does have his vices, he has been known to change his ways when an important person in his life asks him to. He gave them up for both Rose and Sydney at different points in time, and made other efforts to better himself in both cases. This demonstrated how he is willing to put others before himself, but only in certain cases. His parents made attempts at changing him, but he refused to until it was Rose putting pressure on him to follow through. As you can see, once he has let you in, past his bad ass facade, he is truly a person that is worth being friends with.

"Adrian did care passionately about others underneath all of his bravado and flippancy. I'd seen him risk his life to prove it."--The Golden Lily Page 137

"The speaker was Moroi guy, a little older than me, with dark brown hair that had undoubtedly been painstakingly styled to look messy. Unlike Keith's ridiculously over-gelled attempts, this guy hah actually done it in a way that looked good. Like all Moroi, he was pale and had a tall, lean build. Emerald eyes studied us from a face that could have been been sculpted by one of the classical artists I so admire. Shocked, I dismissed the comparison as soon as it popped into my head. This was vampire, after all. It was ridiculous to admire him the way I would some hot human guy."--Bloodlines Page 46


On top of all of that- he can also be a fairly romantic and sweet guy. He doesn't do anything halfway, including his honesty; he always told the truth, even to the point of being brutally honest.

If you haven't yet read the Vampire Academy or Bloodlines Series, I highly suggest you do, but in the meantime, vote for Adrian! If you have read both series, you should know to vote for Adrian already! Would you want an angry Alchemist tampering with your shampoo?
Thanks again to the YA Sisterhood for hosting this amazingly fun tournament and to Monica and Jennifer for their help! 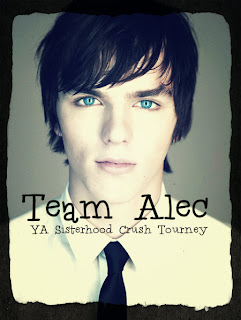 Hello everyone! Welcome to the Second YA Crush Tourney! I’m Steph from StephLikesBooks and I am representing ALEC! He is from Cassandra Clare’s best-selling The Mortal Instruments series and I’m very excited to be supporting him! Cassandra Clare is my favourite author and I’m proud to represent one of her much loved characters! J

*PLEASE NOTE THERE MAY BE SPOILERS FROM SOME OF THE SERIES, IF YOU HAVEN’T READ THEM BEFORE*

PERSONALITY:
·         Alec is a strong character who is very loyal when it comes to his family and those that he cares about.
“It’s me,” he said, and cleared his throat. “I could understand if you didn’t believe me, but I swear on the Angel, Iz, it’s me.” Alec said nothing, but his grip on Jace’s hand tightened. “You don’t need to swear,” he said, and with his free hand touched the parabatai rune near his collarbone. “I know. I can feel it. I don’t feel like I’m missing a part of me anymore.”

·         He’s cute when he gets jealous :)
“You never called me back," he said. "I called you so many times and you never called me back."
Magnus looked at Alec as if he'd lost his mind. "Your city is under attack," he said. "The wards have been broken, and the streets are full of demons. And you want to know why I haven't called you?"
Alec set his jaw in a stubborn line. "I want to know why you haven't called me back."
·         He’s not another cocky bad boy who likes to be mean, he can be insecure and have worries.
“Good organization,” said Magnus. “I knew the man who founded it, back in the 1800s. Woolsey Scot. Respectable old werewolf family.”
Alec made an ugly sound in the back of his throat. “Did you sleep with him, too?”
Magnus’s cat eyes widened. “Alexander!”
·         He has a soft sensitive side to him which is one of the great things about him.
“Irina Cartwright told me it was a pity no one would ever inherit my blue eyes now." He shrugged and looked toward Magnus, who took a hand off the wheel for a moment to place it on Alec's. "It's not like a stab wound you can protect me from. It's a million little paper cuts every day.”
·         Alec is very brave but is shy at the same time.
“There is nothing weak about Alec,” said Isabelle.
·         He is very loyal –especially to Magnus ;)
“But Magnus, he thought. You never told me. Never warned me it would be like this, that I would wake up one day and realize that I was going somewhere you couldn't follow. That we are essentially not the same. There's no "till death do us apart" for those who never die.”
·         He’s kind and caring and innocent.
“Sweet pea?'" Alec said.
"I was just trying it out."
Alec shook his head. "No."
Magnus shrugged. "I'll keep at it.” 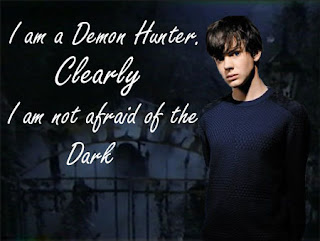 Alec has black hair like his mother and bright blue eyes, is very tall and thin. He’s also very pale. He is very handsome but plays down his looks by wearing damaged sweaters. Camille even says that Alec bears a similar appearance to Will Herondale ;) If THAT doesn't make you vote, I don't know what will! :P

Because Alec is a Shadowhunter he has some special talents that make him much better than ordinary mundanes ;) such as:
- Superhuman Strength.
-Superhuman Agility.
-Superhuman Stamina.
-Superhuman Co-ordination.
Also, because of his alliance bond with Magnus, Alec has some special talents with warlock power....
Spellcasting:  Alec has access to Magnus’ array of spell casting ability, including the ability to create Portals, memory manipulation, healing and curing of others of demonic poison, levitation, in addition to other magical effects.