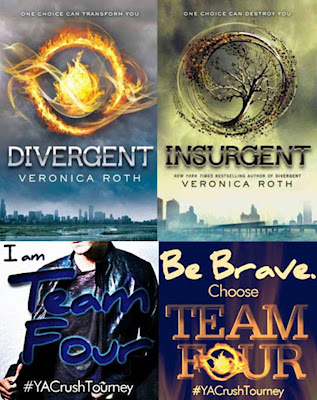 My name's Becky B. I'm very happy to be advocating for Four, the supremely awesome guy from the Divergent series by Veronica Roth.

If you haven't read Divergent here's my review of Divergent and Insurgent.

Vote, Vote, Vote, Vote for Four.  He's chosen Dauntless but believes in the old ways and not what they're doing now.  He has respect for every faction.

In the world of Divergent choice is everything because once you choose a faction you have to follow their rules or you basically become a pariah.  As the tagline for Divergent says, "One Choice Can Transform You."  Four is definitely a guy that has transformed himself.

I really liked Divergent Lexicon's description of Four so I've included it here (be aware if you follow the link that there are some spoilers about Four if you haven't read the books.) -

"He has a spare upper lip, and a full lower lip. His eyes are so deep-set that his eyelashes touch the skin under his eyebrows, and they are dark blue, a dreaming sleeping, waiting color. His voice is deep, and it rumbles. He smirks. He has a stillness about him. He appears tame from the front, by Dauntless standards, but there is a tattoo that peeks out from the back of his t-shirt. His fingers are so long that, the heel of his hand touches one side of Tris’s ribcage, and his fingertips still touch the other side. He is quiet, remarkably self-possessed, and intimidating. He has a faint hollow beneath his cheekbone and taut, defined forearms. His voice is low and smooth and almost soothing. The corners of his mouth turn down naturally and he has a scar on his chin. Even when he glares, his eyes look thoughtful. Their shade of blue is peculiar, so dark it is almost black, with a small patch of lighter blue on the left iris, right next to the corner of his eye. He is muscular, nothing on his body yields. His hair is dark, almost black, especially when he cuts it short."


Now sit down for a spell and listen while I regale you with songs about how awesome Divergent and Four are:

Songs to Sing while you VOTE for Four

Title: Divergent Trilogy
(Sung to the tune of The Adams Family)

So put a Dauntless shirt on.
Prepare to train and roll on.
Enjoy be sure to read on
Divergent Trilogy

Title: Hunt for Crushes
(Sung to the tune of See My Vest)

You see some gals hunt for sport,
Others hunt to court,
The only thing I'm hunting for
Is a crush worthy of meeee.
See my Four, see my Four,
Always hot, never a bore.

Feel that tension, not to mention
Not a bit of apprehension.

Though life treated him rough
he stays strong and extra tough.

Never fear when he's around
Feet firmly on the ground.

Best Quotes said by/or about Four that prove he's who you should vote for:

"I have a theory that selflessness and bravery aren't all that different." - Four (pg. 336)

"Whoever he is, I like him. It's easier to admit that to myself now, in the dark, after all that just happened. He is not sweet or gentle or particularly kind. But he is smart and brave, and even though he saved me, he treated me like I was strong. That is all I need to know.” - Tris (pg. 288-289) 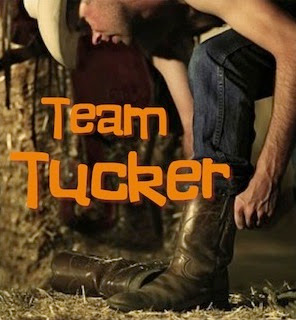 Today, we are excited to be presenting Tucker Avery, resident cowboy and everyone's boy from Cynthia Hand's Unearthly trilogy! 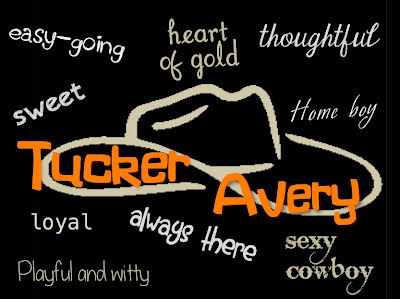 Tucker is the human who fell in love with an angel (well, three-quarters angel). He could choose an ordinary girl who loves him like crazy and would never leave him behind, but he still chooses Clara and always does what he thinks is right by her.  (#3)

He is the hot cowboy with rugged looks (#1, 2).  At first, he can seem be a bit brash and unrefined in his speaking; mostly, he is awkward when expressing his emotions, which is cute and shows a vulnerable side to him. (#4)  However, he's not a brooder, and he speaks his mind, so there aren't too many mysteries about him. His attraction comes from his rugged looks and open, easy-going character. He is the moodmaker, the one who makes everyone feel at ease, and you can safely speak your mind to him, knowing that he will always be honest back at you. (#2)

He is also a brother and a son, and he is extremely devoted to his family's land and to those he cares about. A loyal and devoted guy, Tucker is there when Clara needs him and supports her as she struggles with her emerging powers and the dangers lurking around her, and he moves at her pace, content to stay by her side and support her. He always does what he believes is right by Clara, even if it means breaking their hearts. He is a sexy cowboy with a golden heart. (#5)

For dates, he can take you to some gorgeous places. There'll be romantic dates at beautiful places in Nature, skii trips, and a date at the rodeo where you can see those muscles at work... followed by stripping (because he'll want to take his shirt off after wrestling with a bull). There'll be swimming at the river (more stripping), there will be picnics and boatriding (more muscles at work), and you can go horseback riding on the trails.

Tucker Sightings
#1 Hotness at First Sight
"[Wendy's] brother resembles her in nearly every way: same hazy blue eyes, same tan, same golden brown hair, except his hair is short and spiky and he's about a foot taller. He is definitely part of the cowboy group, although toned down from some of the others, wearing a simple gray tee, jeans, and cowboy boots. Also hot, but in a completely different way than Christian, less refined, more tan and muscle and a hint of stubble along his jaw. He looks like he's been working under the sun his whole life." - Unearthly 59

#2 The Mood Setter
"Tucker's so different... his appeal is this kind of sexy-rugged... Christian's popular because, like Wendy always says, he's kind of like a god. Beautiful and perfect and a little removed. Made to be worshipped. Tucker's popular because he has this way of putting people at ease." - Unearthly 291

#3 The Realization of Love
"He loves me. Inside his head, his every thought and reaction was born of love, love inside and out, crazy, irrational (and sure, a bit lustful) love. He loves me, and that's also what terrified him when he saw me all lit up like a Christmas tree. He doesn't know what I am, but he loves me." - Unearthly 340

#4 His Confession
"I always felt like there was something off about your hair."
"So you thought you'd torture me by calling me Carrots?"
"I still thought I'd never seen anyone as beautiful as you." He drops his head and rubs the back of his neck, embarrassed. He's blushing." - Unearthly 349

#5 So damn sweet.
"What do you see in a guy like Christian Prescott?" he asked me that night when he dropped me off from prom. And what he was really saying then, what would have come through loud and clear if I hadn't been so blind was, why don't you see me? Unearthly

Tucker in action. Lots of sexiness.


Thanks so much to Cynthia Hand for giving the hottest, sweetest, most crushworthy cowboy a place in YA lit. Everyone, Tucker Avery deserves your vote today! So please cast your vote for him and join our #TeamTucker party at Imaginary Reads for more + giveaways!