Welcome to the YA Sisterhood! Today We are holding the last matches in the first round! Thank you in advance for your participation in our Tournament of Heroines! We hope you make some friends (and not too many enemies), discover some fantastic books, and have a lot of fun!
Some general rules before we begin:
There may be some spoilers in the following post. We've tried to keep it fairly general, but overall, this Tourney will not be spoiler-free. So beware.
Secondly, You are welcome to write your own comments about either character in the comments section, but we will not tolerate rudeness. The minute it crosses over from logical argument into character bashing, your comments will be deleted and your vote canceled.  POLLS WILL BE OPEN FOR 24 HOURS AND WILL CLOSE AT 12:01AM EST ON DECEMBER 17th.
And now for the match....

Hi everyone! I'm Casey from The Bookish Type, and I'm so excited to be advocating for Mara Dyer in the Heroine Tourney! If we've ever talked -- whether on Twitter or Facebook or in person -- you've probably heard me gush all over the place about the awesomesauce that is The Unbecoming of Mara Dyer and author Michelle Hodkin. Keep an eye on the Twitter hashtag #TeamMara and weekly Mara Mondays on my blog for updates throughout the tournament!

Who is Mara Dyer? 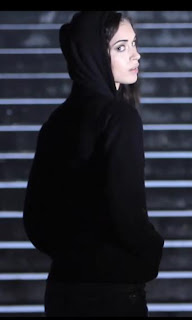 My name is not Mara Dyer, but my lawyer told me I had to choose something. a pseudonym. a nom de plume, for all of us studying for the SATs. I know that having a fake name is strange, but trust me—it’s the most normal thing about my life right now. Even telling you this much probably isn’t smart. But without my big mouth, no one would know that a seventeen-year-old who likes Death Cab for Cutie was responsible for the murders. No one would know that somewhere out there is a B student with a body count. And it’s important that you know, so you’re not next.

Writing under a pseudonym, 17-year-old Mara Dyer has to be fairly anonymous. She's described as having brown hair and "a patrician nose and jaw". Her eye color is never mentioned. Mara's life changed forever the day she woke up from a coma after an accident that left her best friends and boyfriend dead. She has no memories of that fateful night, and she's no longer sure what's real and what's a hallucination brought on by PTSD. All Mara knows is that something strange is happening to her -- and it all started the night her friends died.


Why She's The Best
Mara is smart. She reads books and thinks about the world and always has a witty comeback ready.

She's a survivor. Mara's been through a lot -- losing her best friends and her boyfriend in a tragic accident, suffering from PTSD, losing her memories and maybe her mind -- but she keeps going, keeps living, keeps looking for answers. She's determined to find the truth about why her friends died that night and how she survived.

She's independent. Mara doesn't let anyone push her around -- whether it's the nasty popular crowd, stubborn English boys or abusive pet owners. She doesn't sit idly by and let injustice prevail. She risks her life to rescue a horribly abused dog, and braves a swamp full of alligators to save someone she loves.

You’re the girl who called me an asshole the first time we spoke. The girl who tried to pay for lunch even after you learned I had more money than God. You’re the girl who risked her ass to save a dying dog, who makes my chest ache whether you’re wearing green silk or ripped jeans.

She's fiercely loyal. She stands by her friends and stands up for the harassed and abused. She finds a kindred spirit in Jamie, the school outsider with a twisted sense of humor, and sticks by his side till the bitter end. She defends him from the bullies, even when it means calling down their wrath on herself.

Mara would do anything to protect the people she loves -- even if that means protecting them from herself. Even if that means taking justice into her own hands. She's willing to do whatever it takes, even if it might cost her everything.

Most of all, Mara's real. She's not perfect -- not by a long shot. No one is. She doesn't pretend to be something she's not, but she keeps trying. She learns from her mistakes. Yeah, she'll probably make more -- she's human, after all. But all Mara wants is the truth, to see justice served and to be strong and fearless -- and really, isn't that what we all want? What we all struggle with and strive for? 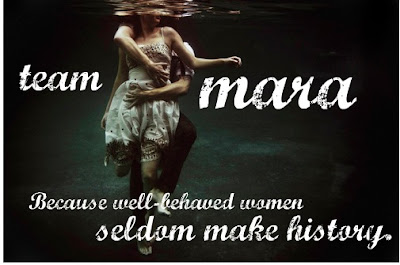 
Mara vs. Karou
Mara and Karou actually have a lot in common. They're both in desperate need of answers, and neither one is entirely sure who she really is. However, I think Mara is more active in pursuit of the truth. Karou seems content to live the life she's always known, frustrated by vague answers from her strange, otherworldly family, yet never striking out on her own. Mara, on the other hand, refuses to let her life be dictated by cruel twists of fate or the lies of those around her. Mara lays it all on the line, refusing to accept what she's been told or to believe her own jumbled memories. She wants to know who she really is, what she's capable of --  even if the answer might hurt. She'll do whatever it takes to be in control of her own life, in control of her own abilities, in control of her own destiny.

And if all of that didn't convince you, all I can say is... 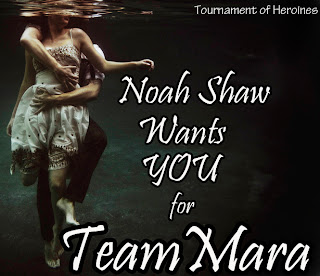 
Hey y’all! I’m Enna Isilee from Squeaky Books and Karou and I are ready to ROCK the Heroine Tourney! From the moment I finished Daughter of Smoke and Bone I knew it was going to be one of my favorite books OF ALL TIME and I’m so excited to be supporting Karou. Check out my blog and twitter to get all the latest Karou updates!

Karou has blue hair (and it grows out of her head that way) and lives in an apartment in Prague. Not Prague Nebraska or Oklahoma, Prague the gorgeous capital of the Czech Republic. She’s an art student by trade and likes to spend time with her best friend Zuzana, but takes a lot of time searching for teeth for Brimstone. Oh, did I fail to mention that she was raised by CHIMERAS?! These demons are far from evil, though. Sure Issa’s snakes can kill you, but only if you try to steal from the shop. And Brimstone’s rams horns may look scary, but he’s relatively harmless… relatively. Karou trades the teeth she finds for wishes.  The scars on her stomach were probably made by bullets.

An artist, teeth smuggler, and protective best friend, Karou is no pushover.

Karou is kick-butt. She knows her way around quite a few weapons (curved ancient knives being her specialty) and even when she doesn’t have one, she can stop a sword-wielding angel with a plank of wood (or the energy-blasting eyes tattooed on her palms). When she needs help, Karou has a necklace of wishes and all she has to do is rub it and wish for any [small] thing and it will come true. But if she needs a bigger wish she's got to do a favor or two for Brimstone. She speaks a ton of languages (not all of them human). But above all that, Karou is a true friend. She can see past any beautiful or ugly exterior and those she loves she loves forever. She’d do anything for her chimaera family, even if she has to (and often does) go out on a limb. And even with her wild personal life, she’s always there for her friends.

What makes Karou a true heroine?

Karou never wavers. She is strong and true. With the training of a warrior, she isn’t above violence, but she doesn’t revel in it. She will literally go to the ends of the earth to protect her family and friends. She’s incredibly brave. When she thought she was being hunted she didn’t cower in the shadows. She became power, not prey.

Like all the best heroines,Karou isn’t perfect. And she recognizes this. She’s made plenty of mistakes in her life, and her curiosity sometimes gets the better of her. What makes her a true heroine is that she embraces her mistakes and learns from them. She's also passionate and strong enough to know when she’s right even if the rest of the world tells her she’s wrong.

Another great thing about Karou, is even when she's falling in love she's not some damsel in distress. Her love-interest is as swoony as they come, but Karou keeps her head and doesn't become obsessed. The needs of her family and friends always come first.

In the Chimaera language, Karou literally means "hope," and she is a symbol of hope to everyone around her. If I ever needed a heroine to help me fight monsters, finish a giant marionette, or just someone to talk to, I wouldn’t hesitate to choose Karou.

Why should you vote for Karou instead of Mara?

Okay. I’ll admit that Mara’s a cool heroine with some wild abilities. But here’s the thing: she’s a little… unstable (to put it mildly). She’s definitely interesting, but she’s not quite the heroine Karou is. Yes, Mara doesn’t like the things she does, but the fact that she can’t control her life makes a better case of why you should vote for Karou. Mara’s hallucinating all the time, suffers from PTSD; and is she schizophrenic or just depressed? All in all, compared to Karou, she's pretty unreliable.

Karou will always be there for you. She's seen the entire world and knows how to survive. She knows exactly what she needs to do and how she’s going to do it. She isn’t perfect, but she's a selfless, brilliant young woman who never shies away from even the most dangerous of missions if it means saving someone she loves. She’s driven, strong, and loyal, and I can't think of a better new YA heroine of 2011.

Just like to add that Karou’s author, Laini Taylor, is pretty much as amazing as Karou herself. And not just because she has hot-pink hair (though it unfortunately doesn’t grow out of her head that way) or because she runs a super-awesome blog. Laini is one of the most literary and wonderful authors I've ever had a chance to read. You should to check her out. And read all her other books (which feature fairies, goblins, curses, demons, and more).

If you voted for Karou, and would like a chance to win a copy of Daughter of Smoke and Bone head on over to my blog today!