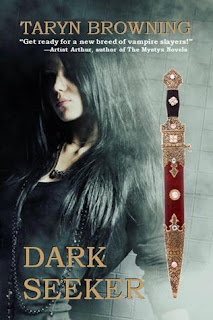 Passed down through her Cherokee heritage, she is a Seeker. She hunts down Vampires and Daychildren. These Vamps are not of the sparkly variety..NO! They are nasty mean creatures. But the Daychildren are much worse! Vamp/Demon hybrids mean these vile beings posses demonic abilities and can roam in the daylight. Only Janie Grey stands between them and YOU!
Janie Grey was born to Slay!
Vamps and Daychildren Beware!
With her blade at her side
and her heart well protected,
She looks after everyone though she's been neglected.
Love's left her bitter
But she is NOT a quitter!
She's a kick-butt Heroine that keeps us safe
It's her job, It's her fate.
For Baltimore's streets it's never too late.
In steps Kai, he's not what he seems,
Blonde hair, green eyes and muscles so lean.
Can he claim her heart? Or meet defeat?
The two of them together is a fierce-some sight.
No one can Beat them in a fight! 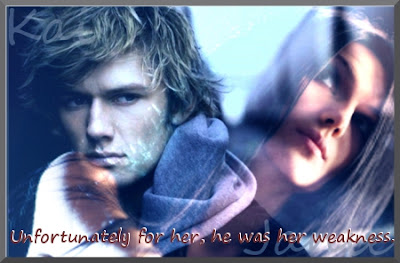 Why should you VOTE for Janie instead of Tris?

Born into a family of powerful women, Janie is tough. Trained in martial arts and dagger/stake technique from a young age, she is equipped with the knowledge and skills to hunt vampires and Daychildren.  No matter the job, she does what it takes to protect humans from the undead. Without Seekers like Janie, the world would be a different place. Janie sacrifices a "normal" teenage life to provide security to the people of her city. While you're sleeping she's hunting your worst nightmares.
HEROINES Possess...
Courage: Check!  “Can we kick some vampire butt already?”
Brave Deeds: Check!  "She could make that sacrifice. It was her job. In everything she’d learned recently about herself and the people around her, she always knew one thing. . .she was a good Seeker. No matter what, she’d get the job done."
Noble Qualities: Check!  "Five are vamps. They’re easy to kill. It’s the ones with demonic abilities that are sometimes a challenge.”
Janie is a fantastic role model...
Janie is confident,  self-assured and self-sufficient, possessing the traits that should be applauded in females today. Although at times reckless and impulsive, she does what it takes to get the job done. Since her father's tragic death, Janie grows up fearful of getting close to anyone and lives by her own life lesson, "Love isn't worth the risk." Throughout the book she learns that putting faith in another doesn't always lead to pain. By learning to let people in,  Janie develops a greater sense of self and in return is able to perform her Seeker duties more effectively.
If you want a hardcore Heroine VOTE Janie Grey, she can kick Vampire butt all night and day!!

Did you vote for Janie Grey? If so make sure to visit #TeamJanie headquarters and sign up for the giveaway if she makes it through this round!!
Hello This is Julie from My 5 Monkeys , and also know on Twitter as @aprilmom00..and I am Tris advocate.
Divergent is the debut novel of Veronica Roth , and her next book Insurgent will be out next April.
About her
Well I found Tris  to be a strong female character. She is petite, has blonde hair and bites her nails. She has always grown up in the Abnegation Faction and has  lived with her family. She has turned 16 years old and learned that she is Divergent. She gets to make a choice of where she wants to live. She choose Dauntless.
Best Attributes
She has compassion, and she stands up to her fellow initiates when they are being bullied .She is brave and smart, and has fire in her to never give up through all the trials in the Dauntless Faction.
What makes her a heroine
She is Brave and Smart and also in control of her emotions . She is also underestimated because of her size. She also faces her fears head on . She is a true heroine . She doesn't have any special abilities but she is different from others.
I think that Beatrice Prior is a True Heroine because she shows compassion and selflessness , and bravery in front of her Faction when the time calls for it.
I decided to ask other bloggers why they liked Tris and here are their opinions

What I loved about Tris is her fierce determination.  While she was naive, in the sense that she hadn't been exposed to things, she didn't let that scare her.  She thrived on tackling her fears, on pushing herself, on doing better, and accomplishing more.  And when she saw someone who was afraid, she didn't look down on them, she defended them, sometimes at the risk to her own life.  She never conformed to the patterns of the world she was faced with, she questioned why things were the way they were, and what she could do to make things better.  -- Andy ( Reading Teen)

I  love that Tris doesn't sugar coat things, when she's feeling a certain way, she doesn't sensor her feelings. If she hates someone, she wants to beat 'em to death kinda thing. Ha! That sounds bad, but it's refreshing! I like that she's a fighter in every sense of the word. She fights for what she wants, what she believes in, and who she loves. She's tough. And we never really see her break down, even after her parents die. ( i think she cries once...i'm not sure.) A lot of people i know said it made her seem heartless, but through-out the whole book Tris is anything but. She puts her heart into EVERYTHING. And after her parents die, she keeps going, she keeps fighting even though she's at her lowest point. If she didn't have heart, she wouldn't care about making things right in all of the Fractions. Another thing i really like about her is that she tries. Even if she's scared shitless (jumping off the building for Dauntless initiation) she still does it. Even if she doesn't know how to do something (fight, climb a ferris wheel, use a knife) she tries. And she doesn't let her fears control her or hold her back FROM trying.  I also love her tattoos! Seriously, after i read the book i really wanted to go out and get some! (LOL! Sorry just had to add that!) -Brooke from Brooke Reports

Please Vote for Tris!
*VOTING IS NOW CLOSED*
Posted by AmyG@YA-Sisterhood at 11:00 PM