Welcome to the YA Sisterhood! Today We are holding the last matches in the first round! Thank you in advance for your participation in our Tournament of Heroines! We hope you make some friends (and not too many enemies), discover some fantastic books, and have a lot of fun!
Some general rules before we begin:
There may be some spoilers in the following post. We've tried to keep it fairly general, but overall, this Tourney will not be spoiler-free. So beware.
Secondly, You are welcome to write your own comments about either character in the comments section, but we will not tolerate rudeness. The minute it crosses over from logical argument into character bashing, your comments will be deleted and your vote canceled.  POLLS WILL BE OPEN FOR 24 HOURS AND WILL CLOSE AT 12:01AM EST ON DECEMBER 17th.
And now for the match....

3. What makes your girl a true heroine?
Izzy is a great heroine, she shows teens that even the "pretty" girls have doubts and personalities beyond the stereotype. She is fierce and loyal to those she loves. Like I've already hinted at, sometimes she may at times be a bit harsh, she always does what is best for her loved ones. When harm comes to them and she is unable to do anything, she is guilt-ridden. Yet she perseveres and is stronger for it.

4. Why should we vote for Izzy instead of Calla?
Calla is great, but Izzy has this entire family who would to anything for her. Calla's situation isn't quite so...pleasant. Izzy's job as a shadowhunter IS to keep werewolves (and other creatures) out of trouble, so she can definitely take her on!
"I’m pure at heart. It repels the dirt.” -Isabelle Lightwood

5. Anything else you’d like to add?
Be sure and check out Letters Inside Out for giveaways and additional buttons to support Izzy! 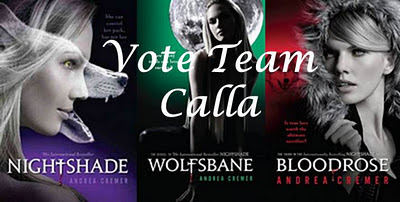 Hi, my name’s Becky B. and my blog is Bibliognome.


I’m the advocate for the ferociously fierce Calla Tor from the book Nightshade by Andrea Cremer.

You can find me rooting for Calla at my blog and on Twitter @GeckyBoz.

You can support Calla with buttons found here.  You can see my love for Nightshade by seeing my review of Nightshade here , my review of Wolfsbane here, and my favorite quotes/lines here.


Things you can do:


Tweet, Facebook, yell from the roof tops (pretty much anything you can do to promote the tournament and Calla would be appreciated.)


All About Calla Tor:


"...the white wolf who'd been eyeing him was no longer an animal, but a girl with the wolf's golden eyes and platinum blond hair." (pg. 5, Nightshade)

Calla can change from a white wolf into a girl and back again at will.  Calla
has platinum blond hair and golden eyes (but if you have any dumb blond
jokes I wouldn’t recommend using them around her because she could
literally rip your face off).


In Calla’s world there are witches (Keepers), Guardians (wolves), wraiths,
succubus, incubi and even a smidgen of zombies.   The history of this
world is complex because the history that's known has as the saying
goes, been written by the winners.  This means that Calla has to figure
out who she can trust.


In a refreshing sort of way the two love interests are both actually
likable and she has many reasons for choosing either one.  This allows a
lot of great tension to happen and lets the reader enjoy an actual
believable love triangle where you don't know right away who she will
choose.


Calla is a strong character who finds that most of what she knows about her
world is wrong and yet she continues to go forward and look for the
truth.


She tries even when terrified:

She makes hard decisions every day:


"As an alpha I could help my packmates get the things they wanted, but there wasn't anyone who could do the same for me." - (Calla pg. 137)


I decided to list Calla’s best attributes via a Name Poem:


Calla shows that she’s a true heroine in the very first pages of Nightshade when she faces down a rampaging bear to save the life of a stranger.  She does this even though she knows that in doing this that there could be horrible consequences for her.  This fearlessness is one of Calla's great strengths as a character and shows that she tries to do what is right no matter what the cost.


Why you should vote for Calla instead of Izzy
- She can transform into a freaking wolf (I don't know about you but I think that that is extremely cool.)
- Sure they can both fight but I would bet that Calla would win on pure
awesomeness alone especially since she’s not a normal type of werewolf
(Being a Guardian means she can shift into a wolf whenever she wants).


This is a supernatural story that has a lot of heart and some great
unexpected twists and turns.  It's  about choosing your destiny and
figuring out which path is best.  Overall it's just a fantastic world
full of characters that you can truly care about.


* Also be sure to check out Bibliognome today and see what prizes I'm offering for supporting Calla and what I'll giveaway if she wins this round.