After an extremely close, well-fought race, the winner is...
EMERSON!

Welcome to the YA Sisterhood! Thank you in advance for your participation in our Tournament of Heroines! We hope you make some friends (and not too many enemies), discover some fantastic books, and have a lot of fun!
Some general rules before we begin:
There may be some spoilers in the following post. We've tried to keep it fairly general, but overall, this Tourney will not be spoiler-free. So beware.
Secondly, You are welcome to write your own comments about either character in the comments section, but we will not tolerate rudeness. The minute it crosses over from logical argument into character bashing, your comments will be deleted and your vote canceled.  POLLS WILL BE OPEN FOR 24 HOURS AND WILL CLOSE AT 12:01AM EST ON DECEMBER 4th.
And now for the match....

Hi!  It's Stacey and Pixie we co run Page Turners Blog & we're the  #TeamKatsa advocates. You can follow us on twitter @PageTurnersblog and on Facebook. We would love to have your support for our amazing heroine - let us tell you a little bit about her.


Katsa is a princess, her Uncle is the king of Middluns, and she was born with a rare gift, she’s a Graceling. Gracelings are borne with an extreme ability; they can do one thing amazingly well. Some Graces show themselves early in a child’s life, but for Katsa, it takes an incident when she’s eight years old for her to get a glimpse at her Grace. While at her Uncle’s court, a distant cousin makes inappropriate advances and with one punch from Katsa he is dead. This leads her Uncle and the rest of Court assuming that her Grace is one of killing. Through the book, Katsa discovers truths about the Seven Kingdoms and herself.


She does not let her Grace or job as an assassin define who she becomes. Her is an example of how she chooses the life she wants to live -


Prince Raffin was the only one who sought her company. “ You won’t do it again, will you? I don’t think my father will let you kill anyone you want.”

“I never meant to kill him,” she said.

Katsa sent her mind back. “I felt like I was in Danger. So I hit him.”

Prince Raffin shook his head. “You need to control a Grace,” he said. Especially a killing Grace. You must, or my father will stop us seeing each other.”

This was a frighting notion. “I don’t know how to control it.”

Raffin considered this. “you could ask Oll. The king’s spies know how to hurt without killing. It’s how they get information.”

Raffin was eleven, three years Katsa’s senior, and by her young standards, very wise. She took his advice and went to Oll, King Randa’s graying captain and his spymaster. Oll wasn’t foolish; he knew to fear the quiet girl with one eye blue and one eye green. But he also had some imagination. He wondered, as it had occurred to no one else to wonder, wether Katsa hadn’t been just as shocked by her cousin’s death as everyone else. And the more he thought about it, the more curious he became about her potential.

Katsa also uses the information she learns as an assassin to help the Seven Kingdoms by passing on the secret information to the Council. The Council is a secret network of spies working to better the kingdom.


What makes your girl a true heroine?:


Pixie: When I hear the word HEROINE - I picture a female that is smart, strong, brave - someone that probably has been called a beep - someone that stands up for what is right.  Katsa embodies all the qualities I use to define a true heroine. She is smart, she uses her knowledge to gain information to help her country as well as to control her grace. She is physically strong but not just because of her grace. She chooses to train long hours to learn to control it. She is brave even when it means defying her uncle and putting her life at risk.


Stacey: Katsa embodies what it means to not let others define who you are and what you’re able to do. In Katsa’s world, being a Graceling and what your grace is defines you completely; you are no longer your own person because of what you were born with. But Katsa rejects this; she’s going to define who and what she is. She’s going to control her grace and she’s going to use her acquired knowledge of the world around her to make the Seven Kingdoms better, she’s not just going to be her Uncle’s muscle. I think because of how Katsa defines herself and how she chooses to live her life makes Katsa a true Heroine!


What makes your girl better than her competitor?


We are at a disadvantage on comparing these two heroines. Neither of us have read Hourglass(shh don't let Sophie know). Emerson sounds like a worthy heroine but based on the synopsis this is why we think Katsa should win. 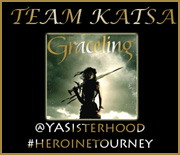 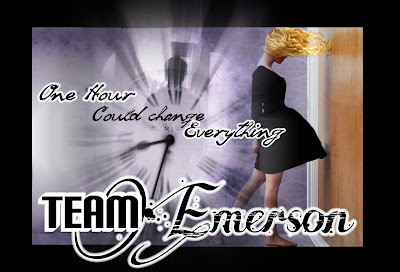 Emerson Cole is the heroine from Myra McEntire's Hourglass! Check it out here!

----Who she is----
Entirely Selfless
Slightly Stubborn
Sometimes shy but never unsocial
Wears converse
Loves to read
Definitely knows how to fight! (she's got a brown belt)
Likes to talk to ghosts (when no one is watching)
and
Travels through time
(Can't get any better than that!)

----Why we love her----
Most girls would fall apart after losing both parents. Throw in an overprotective brother with custody over pretty much her entire life, and the fact that she see's ghosts. This girl can definitely hang in there!
After meeting Micheal (potential love of her life), learning about The Hourglass, and being told that the future of everyone she loves rests in her hands.
Does she panic?
NO WAY!

That's why we love Emerson Cole!


----What makes her our heroine----
She's smart and true, strong willed to the end.
Never backing down.
Defying all odds.
This girl doesn't need saving.
She knows what it'll take to live, to survive, to save them all!
She'll fix the past, save the future, and get the guy in the end while doing it!
----Emerson vs Katsa----
Katsa might be tough but Emerson has the heart. She's not scared to love or to risk everything for the ones she cares about most. Katsa may have a sword and fighting skills, but can she travel through time!
I don't think so!
----Still not convinced?----
Here's a little video with a few words from Emerson!
----What if she wins?----
Team Emerson is always prepared! Here's what you've got to look forward too after a Team Emerson Win!

We've got an entirely new set of buttons and avatars featuring
Timepiece
The second book in the Hourglass series set to release in 2012!
-AND-
A surprise new video from the person that knows Emerson the most!
(Hold your breath Team Micheal fans)
Micheal might make another YA Sisterhood tourney appearance!

Now it's up to you Team Emerson fans!

Make sure to stop by www.booklove101.com and grab yourself a #TeamEmerson button!
Tweet about the tourney using the #heroinetourney tag!!
and
Spread the word!!!!
Let's get Emerson to the finals!!!