And the winner is...
Alex
Welcome to the YA Sisterhood! Thank you in advance for your participation in our Tournament of Heroines! We hope you make some friends (and not too many enemies), discover some fantastic books, and have a lot of fun!


Some general rules before we begin:
There may be some spoilers in the following post. We've tried to keep it fairly general, but overall, this Tourney will not be spoiler-free. So beware.
Secondly, You are welcome to write your own comments about either character in the comments section, but we will not tolerate rudeness. Logical refutations of a defense or character are, of course, allowed, but if we believe it crosses over into character bashing, your comments will be deleted and your vote canceled.  POLLS WILL BE OPEN FOR 24 HOURS AND WILL CLOSE AT 12:01AM EST ON DECEMBER 13th.

Hello This is Kimberly I own  Outhouse Reviews and here in the Outhouse we are Team Nora all the way.
Please feel free to follow us here on the blog, @outhousereviews @Kimberlybrasher or on Facebook. Come Join all the fun as we compete to beat our competitor. Let me tell you a bit about Miss Nora Grey... 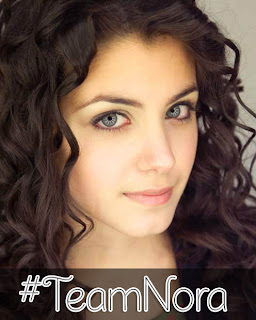 Life for this over achieving high school student has been acceptable, with her best friend Vee beside her she lives a decent exsistance Even as she learns to cope with the death of her father she manages to accept that things are not as they once were. Nora grows as a person with each book. The quiet reserved girl in Hush Hush does a complete 180 and is a strong out spoken fighter in Silence!!

Nora's best attribute is her brain, she has the ability to talk herself out of any situation. She is also not affraid to go out and get the answers she needs to solve her problems.


What Makes Nora a true heroine:

She is the Queen of snarkiness with an attitude!!!  She's fiesty and independant.  She can get herself out of trouble just as easily as she gets into it.


Why should we vote for Nora instead of Alex:

Our competitor is Alex from Half Blood... unfortunately I have yet to read Half Blood so this is where I get my advantage, I think Nora should ultimately win this round simply cause to me it takes a true heronie to use her brain to gain power over the people who are intending to do her or the people she loves harm.


We urge to Vote!! Help keep The angels happy!!! 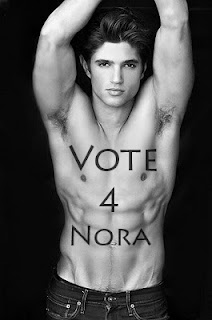 This message was approved by: PATCH

My name's Momo and I'm the blogger behind Books Over Boys. I got the honor of being the advocate for the awesome Alexandria Andros from Jennifer L. Armentrout's Covenant series for this tournament. You can connect with me via twitter and facebook to stay up to date with the #HalfBloodLegion as we support our girl, Alex!
About Alex Andros:


First off, according to Aiden, this is what he thought of Alex when he first saw her...after those three years:


Long, thick chestnut colored hair fell past a chest that had grown in the last three years. Her face was oval shape; lips full like a pure-blood’s. Cheekbones high and eyebrows delicately arched over two wide, brown eyes. Even with the faint purplish bruises marring an otherwise flawless complexion, she was… unbelievable.
Beautiful.

And in Alex's own words:


With all the dirt and overall grossness gone, I looked just like my mom. Long dark hair fell down my back; I had those high cheekbones and full lips most pures did. I was a bit curvier than Mom's willowy frame and I didn't have her amazing eyes. Mine were brown, homely old brown.

Alex is irrational, unstable, out of control, wild, crazy, rash, and stubborn but that makes her everything that she is, which is a fighter. She is unpredictable and very quick to act but she believes strongly in what is right versus what is wrong. She hardly ever lets anything faze her and that makes her high lariously funny. She says the darnest things at the most inappropriate times, lol, but what's life without some humor? She's uber sarcastic and tough and edgy and all-out fierce. She lives in this world where all that matters are the pures and their safety. She doesn't want to be forced into servitude so she is in the process of training to be a Sentinel - one who fights and kills daimons → the scary, looking things that will suck the life out of you. Alex isn't a fighter just physically, but she's also a fighter internally...if you get what I mean. She won't take anyone's B. S and she won't ever give up, you can count on that.
Alex's Best Attributes:
Alex stands out to me among all the other female characters because she's funny. I know, anyone can be funny. Okay, not anyone but it doesn't take a mad scientist to crack a joke here and there. Alex is such a smart mouth; she speaks without thinking and that totally comes with its consequences, haha, but you can't help but think, "Omg, I was so thinking that!" She says stuff that you wouldn't say out loud or stuff that you would bite back. She's definitely hard to forget because she has such a character; that's why when the nominations for this tourney began, Alex immediately came to mind. You won't be able to forget her if you tried. Also, she stands out to me because she can definitely hold her own. She'll take things into her own hands when needed; she won't back down and she indubitably won't take no for an answer. Alex is rebellious and at times, that might sound like a bad thing but like I've mentioned, she believes in what's right and if a little rebellious-ness is needed, where's the harm in that?!

What makes Alex a true heroine?


As defined by...dictionary dot com, a heroine is:
In my opinion, a true heroine is someone who isn't afraid to be heard, someone who speaks up and fights back when they see something that is unjust; someone who isn't afraid to dive head first into a difficult situation. Also, a true heroine is courageous and brave and strong; someone who will step up when needed. And according to that, Alex is all of the above. Alex is a fighter, she's resilient and always bounces back after a horrible tragedy occurs. Like they say, what doesn't kill you only makes you stronger. Because of what she's been through, it has shaped her into the kind of character that she is. You can count on her to save your butt whenever you're in a dire situation, that's for sure. Alex is a true heroine to me because she doesn't need a man to get her out of a ditch when she falls into one. She'll tire out all possible chances of saving herself before she'll resort to a man. Did I forget to mention that Alex can stab stuff? Oh yes, absolutely! She's a feisty little thing! Heck, she don't need no dagger or blade, she'll take you down with a garden spade! (OH WHAT?! That rhymed right there! I'm a genius! ;))

Why should we vote for Alex instead of Nora?

Just kidding, well...not completely. I mean, if Aiden would, I totally would because I don't want no gods or Furies screaming at me, "I SMITE THEE!" ;) You and you and you should all vote for Alex because:
and last but not least, she can kick some daimon booty...so you know, if you had one of those after you, Alex would know what to do! Lastly, you should vote for Alex because I mean, who doesn't wanna see the underdog rise?! #underdogsFTW
Anything else you'd like to add?


Today, on my blog, along with several others, we have revealed the cover to Deity (Covenant, #3) so...you should totally head on over to my blog to see it in all its amazing glory! And lastly, if after reading my defense, you're totally rooting for Alex Andros, you should totally rock a button. Here, I'll make it easy for you and provide the code and everything. ;)

See, how easy was that?! Oh shoot, I almost forgot! *facepalm* Here, check this out, from the author herself: 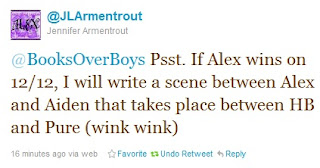 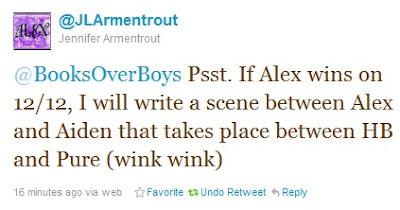 Did you see that?!

SooOooOooOooOoooO, you know wassup! ;)
ALEX FOR THE WIN, FTW!
**voting is now closed**
Posted by AmyG@YA-Sisterhood at 11:00 PM