And the winner is...
IZZY!﻿
Welcome to The YA Sisterhood and round 2 of The Tournament of Heroines, The Superior Sixteen!  Thank you in advance for your participation in our Tournament of Heroines! We hope you make some friends (and not too many enemies), discover some fantastic books, and have a lot of fun!
Some general rules before we begin:
There may be some spoilers in the following post. We've tried to keep it fairly general, but overall, this Tourney will not be spoiler-free. So beware.
Secondly, You are welcome to write your own comments about either character in the comments section, but we will not tolerate rudeness. The minute it crosses over from logical argument into character bashing, your comments will be deleted and your vote canceled.  POLLS WILL BE OPEN FOR 24 HOURS AND WILL CLOSE AT 12:01AM EST ON DECEMBER 27th.
And now for the match....

Hey y’all! I’m Enna Isilee from Squeaky Books and Karou and I are ready to ROCK the Heroine Tourney! From the moment I finished Daughter of Smoke and Bone I knew it was going to be one of my favorite books OF ALL TIME and I’m so excited to be supporting Karou. Check out my blog and twitter to get all the latest Karou updates!

Karou has blue hair (and it grows out of her head that way) and lives in an apartment in Prague. Not Prague Nebraska or Oklahoma, Prague the gorgeous capital of the Czech Republic. She’s an art student by trade and likes to spend time with her best friend Zuzana, but takes a lot of time searching for teeth for Brimstone. Oh, did I fail to mention that she was raised by CHIMERAS?! These demons are far from evil, though. Sure Issa’s snakes can kill you, but only if you try to steal from the shop. And Brimstone’s rams horns may look scary, but he’s relatively harmless… relatively. Karou trades the teeth she finds for wishes.  The scars on her stomach were probably made by bullets.

An artist, teeth smuggler, and protective best friend, Karou is no pushover.

Karou is kick-butt. She knows her way around quite a few weapons (curved ancient knives being her specialty) and even when she doesn’t have one, she can stop a sword-wielding angel with a plank of wood (or the energy-blasting eyes tattooed on her palms). When she needs help, Karou has a necklace of wishes and all she has to do is rub it and wish for any [small] thing and it will come true. But if she needs a bigger wish she's got to do a favor or two for Brimstone. She speaks a ton of languages (not all of them human). But above all that, Karou is a true friend. She can see past any beautiful or ugly exterior and those she loves she loves forever. She’d do anything for her chimaera family, even if she has to (and often does) go out on a limb. And even with her wild personal life, she’s always there for her friends.

What makes Karou a true heroine?

Karou never wavers. She is strong and true. With the training of a warrior, she isn’t above violence, but she doesn’t revel in it. She will literally go to the ends of the earth to protect her family and friends. She’s incredibly brave. When she thought she was being hunted she didn’t cower in the shadows. She became power, not prey.

Like all the best heroines, Karou isn’t perfect. And she recognizes this. She’s made plenty of mistakes in her life, and her curiosity sometimes gets the better of her. What makes her a true heroine is that she embraces her mistakes and learns from them. She's also passionate and strong enough to know when she’s right even if the rest of the world tells her she’s wrong.

Another great thing about Karou, is even when she's falling in love she's not some damsel in distress. Her love-interest is as swoony as they come, but Karou keeps her head and doesn't become obsessed. The needs of her family and friends always come first.

In the Chimaera language, Karou literally means "hope," and she is a symbol of hope to everyone around her. If I ever needed a heroine to help me fight monsters, finish a giant marionette, or just someone to talk to, I wouldn’t hesitate to choose Karou. 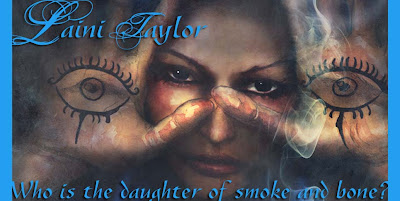 Why should you vote for Karou instead of Izzy?

If I'm being totally honest (which I try to be as much as possible) if there were two people more evenly matched it'd be Karou and Izzy. They both have intense fighting skills, both are extremely loyal to their families, they both have magic-runes, and they're both amazing heroines all around.

If Karou has one advantage on Izzy, it'd be her attitude. Sometimes Izzy's first-opinions of people get in the way of her doing her job. Yes, she usually gets the job done, but that initial hesitation can cause some trouble. Karou doesn't hesitate. She's not irrational, but Karou's willing to look past appearances to what needs to be does and she does it.

Honestly, I wish Karou and Izzy could be a team, they'd kick BUTT! But if I had to choose just one to get things done, it'd be Karou. Because I know there's no risk of her insulting me or making me feel weak for needing help.

In case you didn't see this before, I'd just like to add that Karou’s author, Laini Taylor, is pretty much as amazing as Karou herself. And not just because she has hot-pink hair (though it unfortunately doesn’t grow out of her head that way) or because she runs a super-awesome blog. Laini is one of the most literary and wonderful authors I've ever had a chance to read. You should to check her out. And read all her other books (which feature fairies, goblins, curses, demons, and more).

3. What makes your girl a true heroine?
Izzy is a great heroine, she shows teens that even the "pretty" girls have doubts and personalities beyond the stereotype. She is fierce in every aspect. She is loyal to those she loves. Like I've already hinted at, sometimes she may at times be a bit harsh, she always does what is best for her loved ones. When harm comes to them and she is unable to do anything, she is guilt-ridden. Yet she perseveres and is stronger for it.

4. Why should we vote for Izzy instead of Karou?
Karou is a great character, but I just don't see her as a top heroine. I went through most of Daughter of Smoke and Bone not even sure if I liked her all that much! I did decide I liked her as the book went on, but with Izzy...I loved her from the first time Clary came across her.
"I’m pure at heart. It repels the dirt.” -Isabelle Lightwood

5. Anything else you’d like to add?
Be sure and check out Letters Inside Out for giveaways and additional buttons to support Izzy!
*VOTING IS NOW CLOSED*
Posted by AmyG@YA-Sisterhood at 11:00 PM