Welcome to The YA Sisterhood and round 2 of The Tournament of Heroines, The Superior Sixteen!  Thank you in advance for your participation in our Tournament of Heroines! We hope you make some friends (and not too many enemies), discover some fantastic books, and have a lot of fun!
Some general rules before we begin:
There may be some spoilers in the following post. We've tried to keep it fairly general, but overall, this Tourney will not be spoiler-free. So beware.
Secondly, You are welcome to write your own comments about either character in the comments section, but we will not tolerate rudeness. The minute it crosses over from logical argument into character bashing, your comments will be deleted and your vote canceled.  POLLS WILL BE OPEN FOR 24 HOURS AND WILL CLOSE AT 12:01AM EST ON DECEMBER 20th.
And now for the match....

Hey! I'm Valerie from StuckInBooks and I have the huge honor or advocating for Clary Fray.   Make sure you head over to my blog to enter the fabulous giveaway for ALL of Cassandra Clare's Books SIGNED for spreading the word to vote #TeamClary

Clary Fray/Morgenstern is the heroine from Cassandra Clare's Mortal Instruments Series, which includes City of Bones, City of Ashes, City of Glass, City of Fallen Angels, and coming City of Lost Souls, and City of Heavenly Fire.

Fiercely loyal & driven to help those she loves

From City of Bones - "I don't want tea," said Clary, with muffled force. "I want to find my mother. And then I want to find out who took her in the first place, and I want to kill them.
Feisty & independent - she doesn't put up with anyone's um ... you know

From City of Bones - "I was ninety percent sure." "I see," Clary said.
There must have been something in her voice, because he turned to look at her. Her hand cracked across his face, a slap that rocked him back on his heels. He put a hand to his cheek, more in surprise than pain. "What the hell was that for?" "The other ten percent," she said, and they rode the rest of the way down to the street in silence."

Funny & great to have around
From City of Bones - "Don't touch any of my weapons without my permission."
"Well, there goes my plan for selling them all on eBay," Clary muttered.
"Selling them on what?" Clary smiled blandly at him. "A mythical place of great magical power."


Figures it out when everyone else gives up


From City of Glass - "No. I wanted to tell you that I was proud of you." Clary slewed around to look at her mother. "You were?" Jocelyn nodded. "Of course I was. The way you stood up in front of the Clave like that. The way you showed them what you could do. You made them look at you and see the person they loved most in the world, didn't you?" "Yeah," Clary said. "How did you know?" "Because I heard them all calling out different names," Jocelyn said softly. "But I still saw you."

Forever drawn to the gorgeous Jace


From City of Glass - All that existed was Jace; all she felt, hoped, breathed, wanted, and saw was Jace. Nothing else mattered.
From City of Fallen Angels - Not to be outdone, Clary slid her hands under the hem of his soaked shirt, and let her fingers explore what was underneath: the tight, hot skin over his ribs, the ridges of his abdomen, the scars on his back. This was uncharted territory for her, but it seemed to be driving him crazy: he was moaning softly against her mouth, kissing her harder and harder, as if it would never be enough, not quite enough —.

Fierce & Fights for what she loves


From City of Glass - "Is this the part where you say if I hurt her, you'll kill me?" "No" Simon said, "If you hurt Clary she's quite capable of killing you herself. Possibly with a variety of weapons."
From City of Glass Jace - "You could have had anything else in the world, and you asked for me."  She smiled up at him.  Filthy as he was, covered in blood and dirt, he was the most beautiful thing she'd ever seen.  "But I don't want anything else in the world."
Firm hold on herself

From City of Glass, right after Jace yells at her - "When you told me the first time that Valentine was your father, I didn't believe it," she said.  "Not just because I didn't want it to be true, but because you weren't anything like him.  I've never thought you were anything like him.  But you are.  You are."

Flair for making new or stronger runes
From City of Ashes - "The completed Fearless rune was a matrix of strongly swirling lines: a rune as bold and aerodynamic as an eagle.  She tore the page free and held it up so the others could see it."


Why should you vote for Clary over Cammie
So, um.... I am a bit... biased here.  LOVE Clary and I know very little about Cammie.  She seems cool and all but she isn't Clary.  What more can I say, here? Really vote TeamClary.  BESIDES if Clary wins this whole deal, Cassandar Clare will write the Greenhouse scene from Jace's POV.  YES you read that right!

Last point - Clary gets Jace's vote! Nough said.
From City of Glass - "There is no pretending," Jace said with absolute clarity. "I love you, and I will love you until I die, and if there is life after that, I'll love you then." 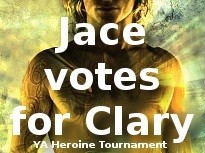 
Hi all! Jen here from Almost Grown-up! I'm in my twenties and an aspiring writer. I've been many things, but a spy isn't one of them! Nevertheless, the idea fascinates me, which is why I'll be representing Cammie Morgan in the Tournament of Heroines.


You can follow along with the Gallagher Girl's tournament efforts using the Twitter hashtags #TeamCammie or just following me @almost_grown_up. But enough about me. You're here for Cammie.

Cameron Morgan doesn't live the life of the average fifteen (seventeen as of the latest book) year-old, not even when the Gallagher Girls series begins. For one thing, she goes to a boarding school. For another, it's an all-girls school. And if that wasn't enough? It's a school to train spies.

And Cammie? The girl is nearly as good as spies-in-training get. Maybe it's genetic. Both of her parents were spies (in fact, Mom's the headmistress of Gallagher Academy), as was her aunt Abby. Dad was lost in a mission, the details of which are only just beginning to come to light.

Ally Carter's been quoted as saying "Cammie is average. In every way average [...] She's not too tall, too short, too chubby, too thin, too anything. She's probably got light brown hair and eyes that change color depending on what she's wearing."

She makes her looks work for her as a spy in training, but not as the cliched femme fatale. Those average looks let Cammie blend in with the crowd to gain information, lose tails, and get closer in tricky situations. She refers to herself both as "The Chameleon" and a "Pavement Artist." It's her gift as a spy, but not her only one.

Cammie is incredibly smart-- she has to be to attend school at the Gallagher Academy. At the age of 4, she cracked the NSA's Sapphire Series and when she was 9, she trailed her father (the renowned spy) through a mall to find out what he was buying her. She also speaks several languages.

One of Cammie's strongest attributes is her sense of loyalty. She doesn't always let someone into her trust and her confidence that easily, but once they're there, it's hard to shake her.

Some examples AND A COUPLE SPOILERS:

(1) Even after things have to be broken off with her first boyfriend, Josh, she still feels badly about hurting him and doesn't rub other boys in his face. (2) Mr. Solomon and Zach both work their way into Cammie's trust (though it takes some time), and even when signs point to them being on the opposite side, she can't quite believe it. (3) Though Macey McHenry starts as the bane of Cammie's existence, she becomes one of her dearest friends. (4) Cammie's love for her father and his memory is taking her down a dangerous path, but she's determined to continue anyway.

3. What makes your girl a true heroine?

Though her life isn't average, in so many ways, Cammie is an average girl. She gets crushes on boys, she studies for classes, she breaks some school and family rules, she makes mistakes. And that's what makes her a heroine. She's one of us. Given the right circumstances, a girl could be like Cammie in some ways. She kicks butt. She doesn't let things stand in her way. She wants to save her friends and her family, and she sometimes does exactly that. We can all do things like that in small ways, which is what she inspires.

But the biggest thing that makes Cammie a true heroine to me? She grows. She learns from her past, both in relationships and spy work. The first book is centered around her desire to have a boyfriend, but the later books show major growth. There are still boys, but they're not everything anymore. She realizes that there are bigger problems than boy problems and first loves don't have to be forever.

4. Why should we vote for Cammie instead of Clary?

Cammie is far from invincible, but she has years of training to back up any teenage brashness that she might lean towards. She tends to look at things as more of a "big picture" whereas Clary will dive right into situations, focused very much on the "right here, right now" of it all. And Cammie has no supernatural abilities to fall back on. She has to rely on her own wits.

Thank you so much to Maribeth of ABC Booknerd who made both of our fabulous team buttons, Angel of Mermaid Vision Books who got me up to speed on Clary, and everyone who has supported Cammie in any way at all. I quite literally could not have done this without you!

And last, but not least, Cammie has a few tips for being a spy:


*VOTING IS NOW CLOSED*
Posted by AmyG@YA-Sisterhood at 11:00 PM