After an incredibly close race, the winner is...
SOPHIE!

Welcome to the YA Sisterhood! Thank you in advance for your participation in our Tournament of Heroines! We hope you make some friends (and not too many enemies), discover some fantastic books, and have a lot of fun!
Some general rules before we begin:
There may be some spoilers in the following post. We've tried to keep it fairly general, but overall, this Tourney will not be spoiler-free. So beware.
Secondly, You are welcome to write your own comments about either character in the comments section, but we will not tolerate rudeness. The minute it crosses over from logical argument into character bashing, your comments will be deleted and your vote canceled.  POLLS WILL BE OPEN FOR 24 HOURS AND WILL CLOSE AT 12:01AM EST ON DECEMBER 10th.
And now for the match....

Hello! I'm Cassi from the The Galavanting Girl Scout or veela_valoom on twitter. I hope everyone will join me in supporting our favorite Hogwarts student Luna Lovegood in the #HeroineTournament

We first meet Luna Lovegood in Harry Potter and the Order of the Phoenix She's describe as "loony" and teased by her classmates. She's got wild blonde hair, a unique sense of style and trademark radish earrings. She's the oddball Ravenclaw who reads the Quibbler, believes in nargles and just doesn't seem to fit anywhere. (And this is a school of wizards, so to be the class freak is kind of a big deal).

She shrugged. "I think they think I'm a bit odd, you know. Some people call me 'Loony' Lovegood, actually."

Best Attributes
Luna is always ALWAYS Luna. She doesn't let anyone change her. Even though she's being teased she never wavers from being herself. Luna is aware that she's the outcast and there are heartbreaking mentions of how she wants friends, but she's not willing change herself to be accepted by other people.
What makes Luna a true heroine?
She's smart, loyal to her friends, loves her father, is unflinchingly honest, stands up for what's right, believes in herself, fights evil...do I even need to continue? She does it ALL. You're unlikely to find a heroine quite as well-rounded as Luna Lovegood. One of the things that impresses me most about Luna is that all the teasing doesn't seem to phase her. She shrugs it off with a smiles. To me that's amazing.

The key to Luna is that she has that unbelievably rare quality of actually not giving a damn what anyone else thinks of her. Now, if we as adults say honestly how many people we've known like that I think very many of us would say uh none! And Luna's like that. She doesn't actually care. She's so comfortable with being different. She's fearless.
-JK Rowling 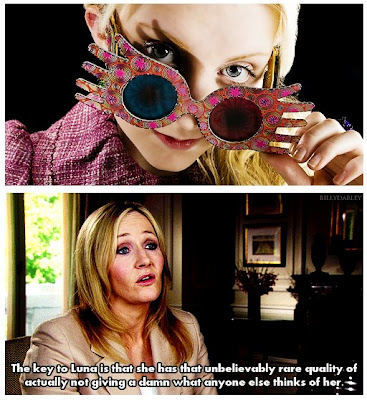 What makes Luna better than Sophie?
I'm not going to say anything bad about Sophie. Luna wouldn't, and as her representative why should I? I think Luna and Sophie would get along, could be fictional BFFs and Luna wouldn't even care about Sophie's...um...species (if that's even the proper word). What makes Luna better is that she's more comfortable in her own skin than Sophie. Luna is fearless and that is so unbelievably rare even among heroines.
Also I want to say that Luna is the heroine that most teenagers NEED to read. She can give them courage to be themselves. Luna shows that it's okay to be different and eventually no matter how odd, you'll find friends who accept you as you are. That's what stands out about her above ALL the other heroines in the tournament. Luna says "you don't have to fit in," and in a world that seems increasingly plagued by bullying thats an important message. Luna is a message of hope.
Anything else you'd like to add?
I really wish I were more like Luna Lovegood. I also want to include this lovely quote about Luna Lovegood's bedroom. Shows how much she truly loves her friends.

"Luna had decorated her bedroom ceiling with five beautifully painted faces: Harry, Ron, Hermoine, Ginny, and Neville. They were not moving as the portraits at Hogwarts moved, but there was a certain magic about them all the same: Harry thought they breathed. What appeared to be fine golden chains wove around the pictures, linking them together, but after examining them for a minute or so, Harry realized that the chains were actually one word, repeated a thousand times in golden ink: friends...friends...friends."

☆All About Sophie☆
Sophie Alice Mercer is the 16-year old, snarky, freckle-faced girl next door type that you NEVER want to mess with! Her brown hair, blue eyes and innocent freckles hide powers that are second to none in all of wizarding history, including in that famous galaxy far, far away!!! That’s right! Even Darth Vader is no match for Sophie Mercer!

But until now (until she turned 16), Sophie “Soo-fee-yuh” has been sheltered her entire life from what she truly is . . . the most powerful witch ever! She’s constantly been moved around the country by her mother, from one school to the next, just because she sometimes (innocently!) exposes her powers to other humans! And then it’s always time to pack up and leave?! Sheesh! How unfair is that?

Yup, the last spell she cast was the last straw; A TOTALLY AWESOME spell at the Senior Prom for the most popular guy at school, making him want to be with the biggest loser at school! And if you haven’t read Hex Hall, then you have got to read the prologue, it’s hilarious! But now she’s done it! With that last, totally wicked spell, she’s been sentenced to Hecate Hall (or as Jenna, her roommate and best friend would say, “Hex Hall”), the school of magical misfits who must be isolated to prevent them from exposing themselves to humans. And that’s where her totally AWESOME powers are developed, along with her crush for two very HOT love interests named Archer and Cal, who, by the way . . . want you all to #VoteTeamSophie!

Snarkiness! Yeah, that may not be a magical power, but it powers her interactions with everyone! And it’s probably what helps make her so fiercely independent and loyal . . . and not easily swayed by the popular (MEAN) girls . . . or even easily discouraged in the face of adversity! It’s also what powers her connection to her other, magical powers!

The unstoppable Sophie doesn’t need any magical instrument to focus her powers! She only needs to think about what she wants to do and her powers take care of the rest! The only problem? Sometimes her accomplishments are heightened so massively by her powers that she far exceeds her goal! For example, when Sophie’s father tells her to break a mirror, she looks at one and simply thinks “break.” The only problem is that she doesn’t just break one mirror, she breaks EVERY mirror in the room! Another time Sophie and her friends are hanging out in a Prodigium club and “The Eye” (religious killers of all things magical) unexpectedly shows up! But while trying to escape, the crowd is hysterically running around so Sophie thinks in her mind, “Move” and then a force field surrounds herself and her friends, but the force field tramples everyone in their path! And let’s not talk again about that wicked love spell she cast on Kevin Bridges! But the full extent of her true powers always comes out when she’s caught up in the toughest situations . . . and then you REALLY see how powerful she is and what she is capable of . . . AND then you truly know that you never want to mess with her!!!

☆Why Sophie is MY HERO!☆

Sophie has AWESOME magical abilities. But that’s not what makes Sophie a true heroine. What makes Sophie a true heroine is that she doesn’t think about the dangers to herself while fighting for what she believes in. So, not only does she fight for what’s right (even when abused by the meanest girls in school), but she’ll even go out of her way (and put herself in danger!) to protect and save the mean girls! EVEN if saving them means killing someone very important to her. Yeah, just like the night The Eye swarmed the Prodigium club . . . in the middle of all that pure craziness, when her friends were only thinking about how to get the heck out, Sophie just wanted to help out the rest of the Prodigium. BUT even then, she knew she had to get her friends out first!

☆Why is Sophie more of a heroine than Luna?☆
All I gotta say is that I LOVE Luna Lovegood! She’s a fiercely trustworthy, loyal friend . . . and she’s courageous too!

But if I needed someone to protect me from Lord Voldemort, I’d pick Sophie EVERY time!! Heck, I think the reason Voldemort tried to kill Harry Potter as a baby in the first place is because he first ran into Sophie as a baby . . . and he wanted NO PART of that!!! Like I said, Sophie is the freckle-faced girl next door you NEVER want to mess with . . . and I guess Lord Voldemort feels the same way!!! Heck, even the Dementors want NO PART of Sophie Mercer!!

So there you have it! Obviously Sophie TOTALLY ROCKS!!! And if you want to have Sophie alongside you up against Lord Voldemort…then #VoteTeamSophie NOW!!!


*VOTING IS NOW CLOSED*
Posted by AmyG@YA-Sisterhood at 11:00 PM