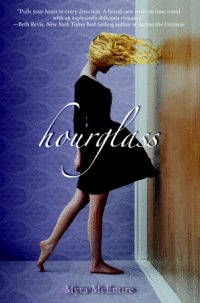 For seventeen-year-old Emerson Cole, life is about seeing what isn’t there: swooning Southern Belles; soldiers long forgotten; a haunting jazz trio that vanishes in an instant. Plagued by phantoms since her parents’ death, she just wants the apparitions to stop so she can be normal. She’s tried everything, but the visions keep coming back.

So when her well-meaning brother brings in a consultant from a secretive organization called the Hourglass, Emerson’s willing to try one last cure. But meeting Michael Weaver may not only change her future, it may change her past.

Who is this dark, mysterious, sympathetic guy, barely older than Emerson herself, who seems to believe every crazy word she says? Why does an electric charge seem to run through the room whenever he’s around? And why is he so insistent that he needs her help to prevent a death that never should have happened?

Full of atmosphere, mystery, and romance, Hourglass merges the very best of the paranormal and science-fiction genres in a seductive, remarkable young adult debut.

Holy Toledo, Hourglass!!!  I've been hearing about how amazing this book for months now, and not to mention the gorgeous cover!!!  I read it the day it came out, and then read it again the next week!  Let me just say, and I hope I can get the words perfect, UN-FREAKIN-BELIEVABLE!!!  Fair warning, this is just going to be a complete gush festival of fan-girling.  This is just one of those books that require it!  Before I just completely start blubbering about this book, I need to lay down some kind of structure.  Since, I love lists, instead of doing my normal 3 things I like, I'll list the top ten things I love about this novel!

Myra McEntire, my friend, you know how to make a girl melt.  I was literally flipping through the pages with giddiness and the goofiest grin on my face!  If you like those butterflies in your tummy, and your insides turning to complete mush, then sprint to get this book right now!  As I was reading this, I was dropped right back into the days of dating my hubby!  That feeling of meltiness is the reason I am married and have 3 kids today!  Thanks goodness these boys are just fictional, I would be in quite the dilemma at this moment!

First off, Baby Sister Britt and I have always loved this name!  If I could re-pick a name for myself, I would be an Emerson!  And this Emerson, lives up to her name!  She's a perfect fit!  She's not the annoying naive heroine that graces many pages of these YA novels.  She's real.  She's dealt with pain, tragedy, guilt, and suffering, but through it all she's not a hollow shell.  She can still laugh!  I love the things that come out of her mouth.  I found myself several times say, "She is so me!!!"  I say the same things she does!  "Kill me!"  I think we all love being able to see ourselves in a character!

Man, do I love time travel!  I've been begging Baby-Sis-B to write me a time-travel novel for years!  There's something about the possibility of being able to go back.  To go back to the times and places we love, we've studied about, or we've read about.    How many of us have dreamed about going back to the Regency Era and meeting our own Mr. Darcy or Mr. Rochester?!?  The idea of time travel puts the world at our fingertips!

Oh Kaleb, my Kaleb!  If only I could put into words the amazingness of Kaleb!  The more he sits in my head, the more I love him!  He is broken!  I mean the epitome of brokenness!  Which means for me, that I am all over that like white of rice!  You know how I love my broken boys!  I could spend the rest of my life fixing him!  His brokenness stems from not only loss but from the fact that he is an empath.  To constantly feel everyone's emotions with no filter would be unbearable.  With that though, he knows what you are feeling without having to say a word!  The reason I am slightly obsessed with broken boys is because they always step up when the time is at hand!  Many times they come off as cocky and aloof, but usually that is just a facade.  When the poop hits the fan, the broken boys come running, in their superman capes!  In Hourglass, when that time comes for Kaleb, it will leave you shattered and moved to the core!  Seriously, if you have not read this book, go read it NOW!!!

I know I've only talked about Michael, Emerson and Kaleb thus far.  But, there is a whole slew of other characters in residence in Hourglass.  The Hourglass is an X-men type school or place for young people to come for safety and to fine tune their abilities.  We didn't get to see much of them in the this book, but I have a feeling they are all going to come into play in the future books!  Its a great cast of characters that you are not going to want to miss!

Wow, the whole concept of time!  If you just sit back and really think about time, it is completely mind boggling!  Is time always on a plain?  If you change something in the past, will your present or future self even realize it?  Or will it simply just become apart of you, and your mind wiped clean of the differences?  I've been tying by mind in knots trying to come to a concrete understanding of something so very abstract!  Come join me, its great fun!!!

Tennessee, the backdrop of many of my dreams of living during the frontier days!  There is something about The South that creates such a rich setting for novels.  The history, the plantations, the hot, steamy temperatures make the world in Hourglass come alive.  One of the characteristics of a time-traveler is the ability to see rips, in a way ghosts.  Now, picture being able to see rips in a place with such historical roots as Tennessee!  Walking down the street, you don't know who you will encounter, southern belles, Native Americans, Revolutionary or Civil War soldiers, the lists goes on and on.  I have a feeling the South will continue to be a mainstay for future novels!

MY LAST 2 ARE GOING TO CONTAIN SERIOUS SPOILERS!  PLEASE DO NOT READ IF YOU HAVE NOT READ THIS NOVEL.  CLICK MORE BELOW TO KEEP READING!

With the super-powers we discussed earlier, many of these powers can be used abusively if not regulated.  Can I just say how shocked I was with Jack's power.  It left me in such turmoil.  In a way I was horrified by his ability, that he manipulated Emerson's mind in that way, but on the other hand, I was so thankful he did.  If not, she would still be a shell of girl in the hospital with no Michael or Kaleb.  Jack's talent gives him god like qualities.  The ability to give and take away has always been uniquely God's.  I believe Jack has a come to view himself as thus also, and Emerson as his creation.  He can ruin or enhance her life with just a thought!  It is such deep and scary stuff!  This is what makes this book amazing!  It blurs the lines between black and white to the extent where right and wrong don't necessarily make sense!

Can I tell you how many long hours I've just sat thinking about the what-ifs of the is novel?  So many!!!  With Jack's power, how can he be stopped?  Unless they can all take Occlumency classes from Snape, I don't know how they can stop him!  He can basically do whatever he wants and with a few little swipes, no one will ever be the wiser!  Its going to be such a climatic ending, I'm sad we have to wait!

Now, this is the real what-if that has had me squirming!  It all deals with the idea of time.  We know that future Emerson told Michael, Kaleb was taking care of her!  I think our mind automatically assumes that Emerson did not go back and save Michael in that scenario.  But, what if she has saved him all along?  What if other things transpired to not allow her and Michael to be together!  I think the idea of Kaleb taking care of her in the future is going to come back in some way.  Either by Emerson knowing that she was happy with Kaleb in the future or by something physically preventing Emerson and Michael from being together, like death.  The hard part is, is that I was super Team Michael until I found out that she was happy in her future with Kaleb.  Now, I am so confused and don't know in which camp I should plant myself!

All glorious wanderings of a good book!  I am dying for the next installment!!!  Thank you Myra!  It was so fun too read!!!!
Posted by AmyG@YA-Sisterhood at 11:13 AM