YA Crush Tourney: Ren vs Patch (Match #8) Goes to Patch

A few things before we begin the swooning....
There might be some spoiler in the following posts. We've tried to keep it as general as possible, but overall this tourney will not be spoiler free, so BEWARE!!!

First off, you are free to write you own comments about either character in the comments sections, but we will not tolerate rudeness. The minute it crosses over between logical argument to character bashing, your comments will be deleted and your vote canceled! You may vote as many times as you like. Since we will all be at the midnight showing of the last Harry Potter (EEEK!!!) the voting times for this bracket will be a little different. Please note: it is only changing for this one bracket! Voting will begin Thursday, July 13th at 11am and will be open 40 hours until 3:00am Thursday night/Friday morning.


Ren LaRoche (Seed 14)
The ooberlicious Ren is advocated by Brittany the baby sister of the Sisterhood).  You can see her reviews here at this blog, follow her on twitter (@brittanydhoward), or check our her new writing blog at http://brittanyhowardbooks.tumblr.com/.  Ren is from Andrea Cremer's series Nightshade.  You can find out more info about this amazing series

here, and you
can read our theories for book 2, Wolfsbane, from our Theory Thursdays segment here.

Oh my lord, Ren. Let me see if I can break down his personality for you guys. He’s
strong (has to be considering he’s destined to be the Alpha of his own werewolf
pack). There is an air of danger to him that makes him unpredictable and exciting.
He’s confident, witty, and could charm a polar bear into buying ice. He is a little
on the cocky side, but somehow it makes him even sexier. He’s protective and
possessive, but hey, he can be protective and possessive of me, anytime! He is the
ultimate bad boy. But what makes him my favorite bad boy? He really loves Calla,
and seeing him trying to open up to her emotionally made me melt.
Bad Boy+Romantic= Best Literary Boyfriend Ever! 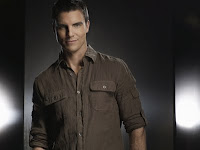 wolf form, too. Ren has dark, charcoal hair and eyes, matched with a killer body. He

definitely has the looks to back up his confident personality. I sort of picture him

Well, Ren is poised to become Alpha, which means he is overall the strongest young
Male wolf in his pack. He’s strong, fast, and a great fighter. He’s also very intelligent
(no dumb jock syndrome here). One of my favorite Ren quotes is when he’s dancing
with Calla in a club, and she is more affected by his presence than she wants to
admit. She pulls back saying, “I’m a lover, not a fighter.” And Ren asks her, “You can’t
be both?” Because that’s exactly what Ren is—a lover and a fighter. A warrior and a
romantic.

I think Ren is such a unique character. He is far from two-dimensional. Like I’ve
said, he’s a bad boy, he’s cocky, he smooth, but he is also very caring, open-minded,
and fiercely loyal. Being Alpha, he could have easily let his cockiness take over and
be a complete jerk, but that’s far from the case. He is so protective over the other
people in his pack, and when he finds their protection outside of his control, he is in
complete emotional turmoil. He isn’t judgmental of his pack’s personal decisions—
he supports them and treats them like family with unconditional acceptance. I feel
like most love triangles have the bad boy vs. the good guy, but honestly I think Ren
is a bit of both. I’ve clearly already covered the bad boy part, but he has everything
you normally look for in a “good guy.” He’s always there for Calla (and the pack).
He’s caring. He’s willing to put himself into danger to help Calla. He can be sweet
and romantic. He listens to Calla. He doesn’t try to force her into a submissive
relationship—he wants her to be his equal. I swear—this guy is perfect. Just the

right balance of stability and excitement.

What makes Ren better than Patch?

I think Ren and Patch are really similar. They both have that bad boy background,
but they fall for a girl and devote everything to her. The real difference—Patch has
that troublesome martyr complex that is so popular in YA fiction. In Crescendo, he
acts like a real jerk (and puts Nora through a lot of crap) in an attempt to protect
her by separating them. In Nightshade, Ren does the opposite. Rather than inflicting
pain on Calla, he takes all the pain on himself, and he’s the one who gets hurt trying
to give her what she wants. And the amazing part? He’s so loyal, that he’s not even
bitter about the pain she causes him. He’d do it all over again, because he loves her.
But just because he gave her what she wants, it doesn’t mean he’s giving up. He’s
loyal and persistent. Also, focusing more on the writing, I think Ren is a much more
well-rounded and complex character than Patch. Ren seems so much more real than
Patch (yes, I know Patch is a fallen angel, so he isn’t quite human, but neither is Ren,
and yet Ren’s humanity seems so much stronger).

I’ll just say this. When I set out to read Nightshade, I was sick of werewolves. I’d
read several werewolf books recently, and I just wasn’t impressed. None of them
really captured me, so I went into Nightshade not expecting much. I was travelling,
and I just needed something to read. But then I picked it up, and couldn’t put it
down. Ren just did something to me. And if you’ve read the book, you know there
is another love interest that Calla seems to favor, but I was way too entranced with
Ren to even care about him (and I know I’m not alone there). It was the type of
book that I finished, and immediately went back and reread all the sections that had
Ren. *SWOON* To tell you how much I love him—I named my new car after him. If
you haven’t read Nightshade, you’re crazy! Even if you’re like me, and you're sick of
werewolves and paranormal creatures, GIVE IT A CHANCE! Give Ren a chance!
Team Ren, FTW!

Patch Cipriano (Seed 19)
Our beautiful fallen angel, Patch Cipriano, is represented by Momo over at Books Over Boys. You can also go follow her tweets on twitter @booksoverboys.  Patch is from Becca Fitzpatrick's series Hush Hush.  You can find out more info about these books here.
Personality:
Patch. Patch Cipriano. Oh gosh! How to describe this hunky piece of smoldering sexiness! Patch is the ultimate bad boy! He's got that "I don't give a crap" vibe going on and it makes you curious about him and why he just doesn't care. He's carefree and tough and sarcastic and witty and uber sexy!
He has that really hard and guarded facade about him but as you read more about him, he has his soft side and he's the sweetest thing in the world! He totally has that dangerous 'thing' on lockdown!
He's such a total flirt and he's not like the brooding type either, like I said, he just doesn't give a crap! But that's exactly why he's crush-worthy!
Overall, Patch is that whole package, you know, the one where he's the ultimate sexy, dangerous, hot bad boy! What more could you ask for? ;)
Looks:
Whew! Don't get me started on his looks! EEE! I'm a mess right now; let's see if I can get through this.
First of all, raise your hands (Yes, both arms please!) or...say I if you love a man who can work the whole "sexy in all black" thing? I know, right?! Patch also has that thing down to the core! He's got that black t-shirt, black pants, black boots, black hair, and of course, the mysterious black eyes down to a T! Woot!
Patch is described as a mint scented “dark-Levi’s, dark-Henley, dark boots kind of guy”. He has dark hair and his dark eyes. See? What did I say about working that "sexy all in black" thing? LOL, workin' it, this Patch!
Patch is just hot. Sizzlin' hot!
Talents:
Oh gawh! Patch will leave you breathless and always wanting for more! He'll kiss you here and there and right when you're about to faint, you know, from being breathless and all that, he pulls away and you find yourself chasin' after him, wanting more!
He's an angel, a fallen angel at that! He fell for love! (Ha, had to giggle at that line!) ZOMG, like that is the cutest and most adorable thing EVER. He is crazzzzzy about Nora and he hearts her unconditionally and he proves so in the book. Just read it and if you have, you know what I'm talking about!
Patch is very charismaticand the stuff he says will linger forever in your mind long after he's already said them!
One of his most famous lines: "You can call me Patch. I mean it, call me." *jaw-drop* EEEE, squealing like a little school girl over here!
Special Attributes:
Patch and his lines! He has the power to just say things that will leave you dumbfounded and blushing straight down to the core! For example:
WAIT!*brakes!* SOME, MORE LIKE ONE, OF THE QUOTES FOUND BELOW COULD BE A BIT SPOILERY. YOU'VE BEEN WARNED! PROCEED WITH CAUTION.
“Say ‘Provoking’ again. Your mouth looks provocative when you do.”
"You possess other people's...bodies."
He accepted that statement with a nod.
"Do you want to possess my body?"
"I want to do a lot of things to your body, but that's not one of them."
"I get my very own guardian angel? What, exactly, is your job description?"
"Guard your body." His smile tipped higher. "I take my job seriously, which means I'm going to need to get acquainted with the subject matter on a personal level."
"You should go," I breathed. "You should definitely go."
"Go here?" His mouth was on my shoulder. "Or here?" It moved up my neck."
Ohmygosh, right?! What did I tell you? ;) Ah!
What makes Patch better than Ren?
On top of everything I've said up ↑ ↑ there, Patch is the bad boy turned good BUT he doesn't become all clingy and sensitive. He still keeps his wits with him and all of his sarcastic remarks don't leave him.
He honestly and truly cares for his lady! Due their circumstances, it doesn't seem like it at times but he has the softest spot for her!
Patch is just too much for words, but whether you're read the books or not, all I can say is:
Patch is absolutely crush-worthy because he's sexy, he's tough and he's got that mysterious and dangerous vibe workin' for him! Plus, he's a dang good kisser!
Also, who else in the world has a name like that, Patch. Patch Cipriano. So bad-a**! <3
Anything else you'd like to say about your guy?
And lastly: 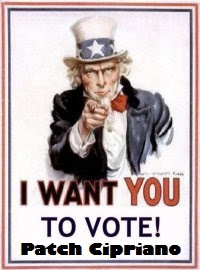 Because of our history of crashing voting sites, we are putting up 3 polls for you to choose from.  Please vote as many times as you want, but if you could spread out your votes between the 3 polls that would prevent it from crashing.  I will give an updates randomly on twitter, so be sure to check out our twitter to keep up with the results.  Voting closes at 3AM Thursday night/Friday morning.  Choose wisely!