YA Crush Tourney: Dimitri vs Ash (Match #16) goes to Ash!


Because of the polls crashing for the 3rd time last week which resulted in a rematch having to be held, we are having to lower the amount of time the voting polls will be open to 24 hours (8am-8am).  We of course did not want to do this, but we see no other way if we want to keep this fair and prevent rematches.  The polls will open at 8am today and close at 8am on Tuesday mornig, 24 hours later.


Before we get started, it's the same rules as usual. We've tried as much as possible to keep everything spoiler free, but to really show the best qualities of a character sometimes spoilers are necessary, so BEWARE!!! Also, feel free to write comments in the comments section about either character, but we will not tolerate rudeness. The moment it crosses over from logical argument to rudeness, your comment will be deleted and your vote cancelled. With all that said, let the voting begin!


The hot hot hot Dimitri is being represented by Casey.  You can follow her on facebook by clicking here.  If you would like to check out more about Dimitri of these boys in Richelle Mead's Vampire Academy series you can check them out here.

Personality:
Dimitri Belikov has a amazing personality. Totally crush-worthy! He is very professional. He takes being a guardian very seriously. He is also very caring and sweet. He is very reserved doesn't show his true feelings to most people. But if you earn his trust you will definitely start to unravel his caring and loving side that is completely irresistible! He also loves western novels it's his guilty pleasure.
Looks:
Tall, dark, and handsome is an understatement compared to Dimitri. He definitely reaches over 6 feet. He is Russian! Which is a shade of tan that people dream of. He is also beautiful. Athletic body that only years of working out can produce.
Talents:
Dimitri is a Moroi Guardian. He can kick butt to protect anyone in danger. He can go from serious to loving in a blink of an eye. He is very passionate when it comes to being a guardian. Which shows his dedication.
Special Attributes:
He is a God in the vampire and dhamphir world. Also to the VA readers. :) He's a killing machine to the Strigoi. And he's only 24! He's dedicated his whole life to killing Strigoi. Until of course Rose comes into the picture and she turns his world upside down.
What makes Dimitri better than Ash?
Dimitri is absolutely gorgeous! He can kick some butt. He doesn't take crap and stands up for the ones
he loves. He loves his family and you fall for him when he talks about his family. It so sweet. It makes your heart melt!
Anything else you'd like to add?
I'm Casey. I'm representing Dimitri Belikov from the most amazing series I have read yet. The Vampire Academy Series by Richelle Mead. If you have not read it yet I recommend you put it on your to-read list. My Facebook link is http://www.facebook.com/teamedward4lyfe
Ash (Seed 6)
The hottastic Ash is from Julie Kagawa's Iron Fey series.  For more information on this series you can check out our review here or you can check out our Theory Thursday for Iron Knight, the 4th book in the series. Ash is being rep'd by the girls from Two Chicks on Books, Jamie and Patricia.  You can check out there blog by clicking on there button to the right.  You can also follow them on twitter @arnoldjamie13 & @1of2chicksonbks.
Personality:
Ash can come off as cold and distant but that's because he's been raised to be that way. He has had to put up persona of the cold Ice Prince of the Winter Court otherwise he would not have been able to survive in the Unseelie Court. But beneath the cold exterior there is a fiercely loyal guy and not just because he can wield a sword like nobody's business. More about that later. He has managed to fool just about everyone into thinking that his heart is as cold as the iciness that literally runs thru him. That is until he meets the girl that melts his heart. He will do whatever it takes to be with Meghan even if that means walking thru poison to help her out, even if it means that he has to put up with her annoyingly prankster of a BFF, Puck, even if it means that he will be kicked out of his court or even be exiled out of Faery.  He will do anything for Meghan!! What is sexier than that? Not much! 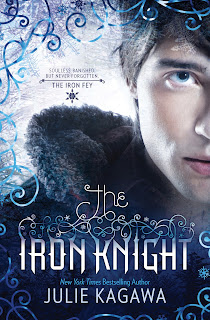 Looks:
We could never do him justice but we will give you a peek of how Meghan sees him... "...he carried a sword, resting comfortably on his hip, and his face bore the fine lines of an aristocrat. But, unlike the others, he looked disinterested, almost bored, with the entire event. His eyes caught the moonlight and glittered like silver coins.” The Iron King
"Up close, he was even more beautiful, with high cheekbones and dark tousled hair falling into his eyes.”  The Iron King
Talents:
Who wouldn't want a guy with as many talents and attributes that Ash has. He's a masterful horse rider, he has mad sword skills, and he can shoot ice daggers at his enemies and centuries of knowledge and expertise. He's a bit on the quiet side, too. But don't think that he's distracted in anyway. Ash is deadly and those that cross do not live to tell the tale. He's also witty and one of his best and favorite attributes is that his sense of humor and sarcasm are intact. With lines like this who wouldn't love him: "Touch her, and I'll freeze your testicles off and put them in a jar. Understand?" The Iron King
Special Attributes:
Have we mentioned that Ash is Immortal!! So of course he's going to be with you forever and ever!!
Why is Ash better than Dimitri?
Ash will literally travel to the end of the earth for the woman he loves, he will battle living nightmares, and he also loves with every piece of him heart, mind, body, and soul. Ash would never leave or try to kill Meghan as Dimitri did try to kill Rose (even if he was Strigoi true love would have won his inner battle). Ash defied his own court to be with Meaghan, Dimitri pushed Rose away because of duty. Granted both these boy's are smoking hot but we'd rather have our Ice Prince with shining eyes and awesome sword skills over a guy who wears dusters and reads Western novels and pushes the people he loves away. Just sayin Ash is the best!
Anything else you would like to add?
Here are a few quotes from Julie herself about Ash:
From supernaturalsnark.blogspot.com Interview with Julie.
If you were in an emergency situation (of any kind) and could call one of your characters for help, who would it be and why?
"Well, if it were something major, like the Zombie Apocalypse, I would call on Ash, because he’d be able to chop through the hoards easily. If it were something like getting my cat out of a tree…I’d still call Ash, because Grimalkin would probably mock the poor cat, and Puck might turn it into a bird or something."
From interview on enchantedinkpot.livejournal.com
If you weren’t the creator, what team do you think you would side with?
“Oh, definitely Ash.  (Though I do love Puck, too.)  I just have a thing for dark, brooding bad boys, especially if they're a HBWS. (Hot Boy With Sword.)  It’s a weakness.  ;-)"
Also we're sure if Ash wins Julie will have something awesome to share with everyone like a teaser from The Iron Knight ;) so VOTE ASH and use the hashtags #TeamAsh and #IcePrince to support him!
*Voting is now closed*
Check the Crush Tournament Tab at the top for information about future matches.
Posted by AmyG@YA-Sisterhood at 8:00 AM