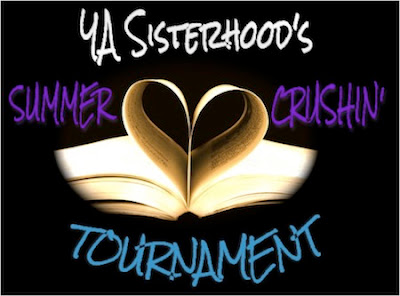 We are excited to announce the participants in the
1st  Annual YA Sisterhood Summer Crushin’ Tournament!
According to your nominations and votes, we compiled a list of the Top 25 Most Popular YA Heartthrobs. We’ve ranked them by seed according to the number of votes they received. In instances of a tie, we decided seed order by drawing characters randomly out of a hat (can you tell I’m a teacher?). There were no ties broken to decide what characters made the tournament, only to determine seed.
Now, before we can move on in the tournament, we need your help! We need advocates for each character, which is a person who is willing to take the time to write up why they think their character is the most Crush-Worthy of them all! Characters names that are in white below STILL NEED an advocate. Those in blue font are already taken. If you are interested in helping out, please email yasisterhood(at)gmail(dot)com with a list of characters you’d like to defend in order of preference.
Secondly, we also need people who are willing to be what I call pinch-hitters. That is—if someone who volunteered to be an advocate must drop out at the last minute, we need people willing to step in on short notice. If that is you, please please please let us know!
When we’ve filled all the advocate positions, we’ll start scheduling the matches! We’re looking to do 3-4 matches a week (Advocates, you’ll know in advance when yours is). Once the Match is posted first thing in the morning, you guys will have 24 hours to vote! Those votes will determine who moves on in the tournament!
And now… without further ado….
*DRUMROLL*


Alright. All characters are now taken. Feel free to continue to email us if you'd like to be a pinch-hitter! Be on the lookout soon for the Match Calendar, and advocates you'll receive more information later today!
That’s it, folks. That’s the list. I’m sorry if your favorite didn’t make it. And if your favorite is farther down the list than you’d hoped, don’t worry! Seeds only determine who is placed where in the bracket! Someone with a lower seed could easily take the whole thing if you guys help spread the word on Match Days and call in your troupes to vote!
Again, if you’re interested in being an advocate contact us with your preferred list by email, or leave it in a comment below and leave us YOUR email.
And last, but not least, if you’d like to take a look at the bracket, click on the Tournament page on the tabs at the top of the home page (match dates are not yet set).
SQUEEEEE! We’re so excited! We think this is going to be a lot of fun!

If you're an advocate, feel free to pick up one of these icons!

If you want one specifically for your character, let me know!
Posted by Brittany Howard at 1:49 AM

Email ThisBlogThis!Share to TwitterShare to FacebookShare to Pinterest
Labels: Advocates, Crush Tourney, Seeds, YA, YA Crush
Newer Post Older Post Home
Three sisters (and some honorary ones) share a love of YA literature, review new books, and talk old favorites.