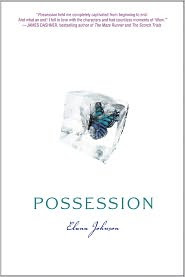 Vi knows the Rule: Girls don’t walk with boys, and they never even think about kissing them. But no one makes Vi want to break the Rules more than Zenn…and since the Thinkers have chosen him as Vi’s future match, how much trouble can one kiss cause? The Thinkers may have brainwashed the rest of the population, but Vi is determined to think for herself.

But the Thinkers are unusually persuasive, and they’re set on convincing Vi to become one of them….starting by brainwashed Zenn. Vi can’t leave Zenn in the Thinkers’ hands, but she’s wary of joining the rebellion, especially since that means teaming up with Jag. Jag is egotistical, charismatic, and dangerous: everything Zenn’s not. Vi can’t quite trust Jag and can’t quite resist him, but she also can’t give up on Zenn.

This is a game of control or be controlled. And Vi has no choice but to play.

Have I mentioned how much I love Dystopian? Well let me say it again "I LOVE DYSTOPIAN!" There are so many amazing Dystopian books that have come out lately, and go ahead and add Possession to that list. Possession is a bit different from other Dystopians though. If you are an avid reader of supernatural YA and have not read any Dystopian, this would be a good first to sink your teeth into. It is a classic dystopian in the sense it has a setting in future sometime after the fall of modern day society, but surprise--some of the characters have supernatural abilities!!! I have yet to read a book that encompasses both, so I must give props to Miss Johnson for being the first!

We've already covered the awesomeness of supernatural characters placed in a dystopian society, but Possession has so much more. Let me list them for you:

Let's snark I mean start (excuse my grade school humor) with Violet, "Vi" for short. If you are a fan of Sophie from Hex Hall or Evie from Paranormalcy you will love Vi. She's a strong character with a razor sharp whit. Vi's been dealt a hard hand in life with the death of her sister, her father and the neglect of her mother, but those hardships have matured her into a worthy heroine. Instead of this pain turning her into a whiney, weak young woman, it's made her strong and unbreakable, which she needs to be able to face what hits her throughout the book.

Of course, we couldn't have a young adult book without a steamy love triangle! In one corner weighing with an amazing tan and jet black spiked hair, we have baddie Mr. Jag and in the other corner weighing in with ocean blue eyes and beautiful blonde locks we have the goodie Zenn! Plus, with names like those, how could any girl resist either one? Each of them also have their own little secrets (that I will not divulge; you'll have to go find them out yourself).

Oh my, what an ending! I am really big on book endings. You can basically have a horrible book, but if you give me a killer ending, then I will love you forever! And, ladies and gentlemen, let me tell you, this has a killer of an ending!!! The aspects of the dystopian world with the addition of the supernatural powers some of the characters have makes for one explosive ending! I sensed it coming, but not quite the way I expected, and I was still greatly moved by it! Ms. Johnson has left me craving more, and I'm so sad it will probably be a whole year before I am able to get more!

If I had to warn readers about anything in the story, I would say that at times it was a little confusing. So many books have these huge setups for their world where you are getting all your information right at the beginning. Possession does not have that. It jumps right into the action and explains the world as it goes along. With that, you have to read carefully or you'll miss something. I tend to skim books, reading for plot first then content later, and I found myself having to double back because I missed something important. On the other hand, all you readers out there that find world setups boring and slow, this book is for you! The first chapter throws you right into the action and just keeps going. However, if you like information overload on the world that you are entering, be patient with this book. You'll get it, but just gradually. After everything is said and done, regardless of the style that you prefer, read this book!!! It's an exciting read that will make you question what really is bad? Is everything that is not good automatically bad or can some things be both?

REMINDER: Wednesday is our first throwdown between our YA Crushes! Be sure to drop by then and vote for your fav guy!!!
Posted by AmyG@YA-Sisterhood at 3:46 PM